Risk: The Walking Dead – Survival Edition is a redesign of the classic Risk game published by USAopoly. It is for 2-5 players. In this game, players get to experience the classic game of Risk with a Walking Dead twist. For those who have played Risk, this isn’t very much different.

To begin, players will choose a group of survivors, from Rick’s group to Governor’s . Each one is represented by a different color and has special powers that are indicated on the group cards. Once player colors have been chosen, the placement of walkers on the board begins. Depending on the number of players will determine how many walker controlled areas start the game. This is determined by flipping over territory cards and placing 3 walkers in each territory revealed. Once all the walkers have been placed, the players can begin deploying there survivors on the board one at a time until all territories have at least 1 survivor on it. At this point the game can begin.

Each player’s turn begins by flipping over territory cards and deploying the amount of walkers onto the area, determined by the outbreak meter at the top right of the board. Each round, the amount of walkers that appear increase. From there, the player flips over an event card that can either help or hurt. Usually the events will provide helpful resources if the player is able to fulfill the requirements, such as invading and winning 4 walker territories in the player’s turn. The benefits that the player can receive can be grenades that allow the player to change one dice to whatever they want or a tower that raises the number on one dice by 1. After the event card has been revealed, the player will then bolster their troops by taking the number of territories they control and dividing by 3 and rounding up. If the number is less than 3, you will round up to 3. Also if you control all the territories in an area, you gain a zone bonus. Finally, you can trade in ammo crates for survivors as well, determined by the handy chart printed on the board.

At this point, the player will begin to invade other adjacent territories. First the player announces the territory they are attacking from and the territory they are attacking. The player chooses how many survivors will attack from 1 to 3. The defender chooses how many survivors will defend, either 1 or 2. The attacker rolls the red dice and the defender rolls the black dice. Rolled dice are placed in order from highest to lowest and compared to the defenders. Highest roll wins and the loser removes a survivor from the territory. This continues until the area is either won or lost. Invasions continue from other areas until the player chooses to stop. When battling walkers, the player will add 1 to each roll. Play then proceeds to the next player.

All of this continues until the Overrun card appears in the event deck. At this point the player flips over one more event card for them to try to accomplish and each player finishes out the round. Points are then scored based on territories controlled, strategic locations, regional zone bonuses and bullets from ammo crates. The player with the highest score wins. 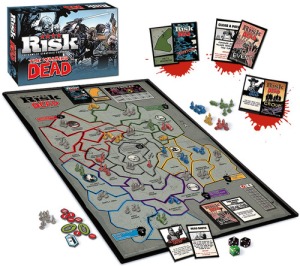 COMPONENTS
The pieces in this game are really quite remarkable. The board is beautiful and depicts the area around Atlanta, from the prison to Woodbury. Everything about it looks very nice and draws you in really well. The event cards have art work pulled right from the comic and they look great. I love the designs. The only small complaint that I had was that the survivor and walker pieces felt a little small. Once you start playing though, you kind of forget that they’re small as they tend to fit the scale of the board really well. So, I’m not gonna complain about them. All in all this game is well put together.
8 out of 10

RULEBOOK
The rule book is in color and is a beauty of design with tons of pictures and examples on how to play. Everything is easily understood and written well. There’s even an amazing picture ripped from the comics in beautiful color that looks outstanding. There’s nothing here that isn’t good. Great rulebook.
9 out of 10

GAMEPLAY
The one thing about this game is that like other games of it’s type, Monopoly, it takes quite a long time to play. It took us nearly 2 hours to play through. While I enjoyed the game, it tended to drag on for quite awhile. Newer players might get bored or discouraged after some time. Veteran gamers, will enjoy the challenge. Walking Dead fans will love the theme. It’s a lot of fun to play and moving the pieces around was rather fun. After awhile of playing, we began to make truck noises when we would invade a territory. All in all, very fun war like game.
9 out of 10

OVERALL
Risk: The Walking Dead Survival Edition is a light to medium war game of conquest and domination. As I stated earlier, veterans and Walking Dead fans will enjoy this game completely. It’s a great entry point for new gamers into war games as well. You will get sucked into surviving and praying that each time walkers pop up, that it will be in your neighbor’s territory and not your own. I highly recommend this game to anyone that is looking for a great war like game. Overall it is a piece of excellence.
9 out of 10

For more information, please check out USAopoly at their site.

I'm a happily married man with 2 wonderful kids. I love my family very much. I'm a big fan of board, card and RPG games and have been playing for over 20 years. As a board and card game reviewer, I'm hoping that this blog will inform, educate and entertain you. If you like it, please tell your friends and have them join in on the conversations. Thanks and GAME ON!!
View all posts by Gaming Bits - Jonathan Nelson →
This entry was posted in Reviews and tagged board, board games, card, card games, dead, game, games, risk, survival, usaopoly, walking, walking dead. Bookmark the permalink.