Founders of the Empire Review

Founders of the Empire is a game by Aleksei Kalinin and Petr Tyulenev published by Rightgames. It is for 2-4 players. In this game, players compete to build the best civilization.

To begin, all the tiles will be shuffled separately and a number of red tiles will be placed face up on the table. This is determined by the number of players. The first player will now draw a number of green tiles and place them face up, again determined by the number of players. Players will take turns choosing until each player has 2 tiles in front of him. The first player will now create a column of tiles pulled from the different colored stacks. He will create a column of 3 green tiles, 2 drawn from the stack and the leftover tile from earlier. He will create a column of two blue tiles and a column of one purple tile. Tokens are seperated into stacks and play now begins.
At the start of a player’s turn, he will draw a tile from one of the stacks adding it to the row. If there are 5 tiles in a row, all 5 tiles are discarded and the drawn tile becomes the only tile in that column. He can then play one of his tokens. Each token has different abilities, which I will discuss in more detail in a moment. Finally he can add a tile to his civilization from those face up in columns on the table. However there is one small problem, he must be able to have the right resources to add it. To add it, the required resources in the top of the tile must neighbor tiles either horizontally, vertically or diagonally that create the resource. Each tile is only allowed to produce one resource per turn. If a player is unable to add a tile from those face up, he’s allowed to draw one of the green tiles from it’s stack and add it instead. He can also remove an old tile and replace it with a new tile instead, placing the old tile face down in front of himself. These face down tiles will be worth a negative point at the end of the game.

Now let me explain the tokens before I get into the end conditions. There are 4 types of tokens, war, coin, craftsmen and carriage. The war token steals one of your opponents tiles. To do this, you will place a war token on any of your opponents tiles that are closest to you. That tile will not produce resources or give victory points at the end of the game. These can be replaced however just like I stated earlier at a cost of -1 points. The coin token buys a resource from one of your opponents tiles. This allows a player to produce resources in his civilization that he might not be producing, allowing him to place a tile that he couldn’t before. At the end of a players turn, he will acquire any coins that were placed on his tiles, allowing him in his next turn to buy resources from his opponents. The craftsmen token makes one of your tokens give you points instead of resources. It is placed on one of your tiles that produces the required resource. That tile will not produce resources anymore but will instead provide the player with 2 victory points. The carriage token unites several of your tiles. This is done by placing the carriage token in the middle of 4 tiles. This allows each tile to now produce the resources of the other 3 tiles.
The game is over when either there are no more face up victory tiles, there are no more tiles left in the 3 columns, or no players can earn any more victory points. Each player will now count up his points. He will gain victory points from victory tiles in his civilization. He will get 2 points for each craftsman token. 1 point for each token not in his civilization and -1 point for face down tiles. The player with the highest score wins. 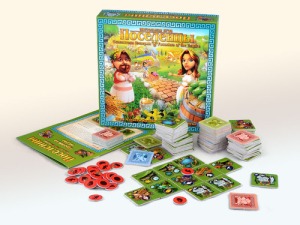 COMPONENTS
This games consists of a lot of different cardboard pieces. There are different colored civilization tiles and lots of tokens. All of these are very thick and sturdy. They are very nice and the artwork is very appropriate. I truly love playing with these pieces as they are just the right size. Everything is really well done with every piece and as I said, they look great.
9 out of 10

RULEBOOK
The rulebook isn’t very long yet it is well put together. I received both English and German rules with my copy. Both are full color with several pictures including set up examples. Everything is explained wonderfully and is easily read and understood. I love when rulebooks are this nice.
9 out of 10

GAMEPLAY
Let me say first off, that I’m not a great fan of tile laying games, however I really like this one. This is really more of a city building game than a tile laying one. Everything blends smoothly together from choosing tiles to building your civilization. I love how easy this is to play. Every piece plays off the others very well. The artwork is great. The pieces are great. The game is great. It’s just great fun, there are no two ways about it.
9 out of 10

OVERALL
Founders of the Empire is a light to medium light game of tile placement and city building. There is a great sense of building your empire and keeping it safe from your warring neighbors. Every decision is made better by the choices you make. Resources are important to your empire just like in the real world. I can say that everyone will enjoy this game, even non tile laying players like myself. For those that do like tile placement, this is Heaven. Overall, this is a great game and one that every player should love.
10 out of 10

For more information, please check out RightGames at their site.

I'm a happily married man with 2 wonderful kids. I love my family very much. I'm a big fan of board, card and RPG games and have been playing for over 20 years. As a board and card game reviewer, I'm hoping that this blog will inform, educate and entertain you. If you like it, please tell your friends and have them join in on the conversations. Thanks and GAME ON!!
View all posts by Gaming Bits - Jonathan Nelson →
This entry was posted in Reviews and tagged aleksei, aleksei kalinin, board, board games, card, card games, empire, founders, founders of the empire, games, kalinin, pert, petr tyulenev, rightgames, tyulenev. Bookmark the permalink.