Sofia the First Royal Prep Academy is a game published by Wonder Forge. It is for 2 players. In this game, players will be trying to find as many charms for their charm bracelet as possible. The player that finds the most on their turn will be declared the winner.

To begin, there is a bit of assembly to put the Royal Prep Academy together, including attaching the bases, staircases, punching out the windows and attaching the window sills. Once this is completed you will be ready to play. You will start by taking all the plastic charms and placing them inside the tray on the inside of the academy. Next, turn all the tiles face down and mix them up, stacking them neatly into a pile afterwards. The first player will start the game as Princess Sofia. When it is their turn they will sit where the outside of the academy is facing them. They will put on the bracelet. The other player is the hider and they sit where the inside of the academy is facing them. Play now begins.

The hider will go first. He will flip over one tile and do as the tile dictates. There are 3 types of tiles; charm tiles, friend tiles and guessing game tiles. If a charm tile is flipped up, the hider will hide that particular charm somewhere inside the academy by hanging it on one of the posts on their side of the academy. During this time, the Princess Sophia player has to close their eyes and not peek. If a friend tile is flipped over, the hider will take the corresponding friend token and hand it on one of the posts on the inside of the academy. They then will open the window of that same spot to show the Princess Sofia player where that friend is. If a guessing game tile is flipped over, the hider takes one of the charms that is still in the tray and places it in their hand secretly. The Princess Sofia player then gets one try to guess which charm they are holding. If they guess correctly, they get to add that charm to their bracelet, if not it goes back into the tray.

Next it is the Princess Sofia player’s turn. That player will then spin the spinner to see how many windows they get to look in. They will gently swin the windows they choose to one side. If they find one of the charms that were hidden by the hider, they get to add it to their bracelet. This keeps going back and forth until all the tiles have been flipped over. Once that happens, the Princess Sofia player will count up how many charms they were able to find. That’s their score. At this point, the player’s now switch roles. The hider now gets to be Princess Sofia and the previous Princess Sofia player is now the hider. All the friend tokens are removed and the charms are taken from the bracelet and replaced into the tray. The tiles are mixed up again and then placed into a stack. The next round of play begins following the same set of rules as outlined above. At the end of scoring for this round, players compare their score. The player with the highest score from finding the most charms for their bracelet is the winner. 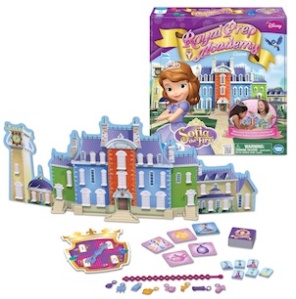 COMPONENTS
There’s lots of pieces to this game. First off as I stated earlier, there’s some stuff that has to be assembled to make the Academy itself. Once completed, it’s larger than I thought it would be. The windows take a bit of time and figuring out to put them in the right place. The whole thing looks really nice when it’s together though. The panels are thick cardboard as are the steps that attach to the bases. The plastic bases for the academy as well as the windows are all hard plastic. I really like how neat everything looks. I just wish the windows were a little bit larger with more room between the windows. It seems that some areas have a difficulty in moving the windows over to see the full window area. Not a major deal, but needs to be noted. The tiles are all nice and thick and the artwork is really pretty. The friend tokens are really nice as well. They are thick cardboard too. The charms and bracelet are rubber or plastic of some sort. They are easy to put together and are very nicely crafted. The spinner spins very easily and is well made as well. All together, the components are top notch.
9 out of 10

RULEBOOK
The rulebook isn’t very big for this game. It’s mainly just a glossy sheet of paper. It’s really simple to read and understand. There is some really cute artwork on it. Everything is explained properly so there’s no confusion. It does everything you need it to. You won’t need it more than once though as that’s just how simple the game is. I do like that their is a section for extra fun with the game. This involves the lessons that are on the tiles and asking your child how they have learned these lessons, or what it means to them. That’s a nice little added bit that is really cool.
9 out of 10

GAMEPLAY
This game is fun. My daughter loves using the bracelet and attaching the charms to it. She actually does pretty well with the whole scavenger hunt type gameplay. The game is really cute and has some great values to instill in your kids through the use of the charm tiles. This isn’t a difficult game to play but it does take a little longer than I’d like for it to. Most children’s games that we play seem to take about half the time that this one does. What we’ve done to cut out some of the time is to only play one sided. I do the hiding and she does the hunting. If she gets more than half of the charms on her bracelet, she wins. If she doesn’t than I win. That’s not an official variant, just one that works a little better for us. My daughter tends to get bored easily if a game takes too long. Still, this isn’t bad. She likes it and that’s good enough for me.
8 out of 10

OVERALL
Sofia the First Royal Prep Academy is a light children’s game of hide and seek. It’s really cute and the production quality of the game is really great. Young girls, especially those that like to play dress up like my daughter does, will like this game. I can see how this game can encourage critical thinking. If your kids like Sofia the First then they just might like this game too. I recommend giving the game a try. My daughter likes the game but usually prefers to play other games to this one. It’s not a bad game, just one that she seems to have to be in the mood to play. Surprise Slides seems to be her favorite Sofia game. It might be better with older girls that don’t get bored as easily. I rather enjoyed hiding the charms. It surprised me that she didn’t like it as much as I thought she would. Still, it’s a good game, just not necessarily for her.
8 out of 10

For more information about this and other great games, please check out Wonder Forge at their site.

I'm a happily married man with 2 wonderful kids. I love my family very much. I'm a big fan of board, card and RPG games and have been playing for over 20 years. As a board and card game reviewer, I'm hoping that this blog will inform, educate and entertain you. If you like it, please tell your friends and have them join in on the conversations. Thanks and GAME ON!!
View all posts by Gaming Bits - Jonathan Nelson →
This entry was posted in Reviews and tagged academy, board, board games, card, card games, first, forge, games, prep, royal, royal prep academy, sofia, sofia the first, wonder, wonder forge. Bookmark the permalink.