Giant is a game designed by Mark Hanny, published by Joe Magic Games, Inc. It is for 3-5 players. In this game, players will be trying to save their kingdoms as they hire troops to battle giants. The player that can best accomplish the task will be declared the winner.
To begin, each player is given a flag card which is placed inside a card holder. All the combat tokens of that color are placed inside the bag. The large giant stand ups are placed inside the large plastic holders with all the circle punch outs still in place. The defender cards are all shuffled together and then each player is dealt 6 cards. The rest of the cards are set aside not to be used. Play now begins.

The game starts with a card draft. Using the 6 cards that they received earlier, each player will choose one card and place it face down in front of them. They pass the remainder of the cards in their hand to their left. This continues until each player has drafted 6 cards. Tokens are then drawn from the bag, 3 times the number of players. Those tokens are then placed inside a cup (not included). The cup is shaken and the tokens are then poured out onto the table. In turn order, each player will take one token from the pile as long as it’s not another player’s color.

From this point, the game continues in order in a series of 3 actions; draft chips, hire a troop, attack a giant. Players may take each action once during their turn. The first action that can be taken is to draft chips. Just like earlier, a player may take a chip of their choice as long as it’s not another player’s color. If there are more than one chip of their own color showing, the player can choose draft as many chips as there are chips of their color up to a maximum of 3. If the player can not draw a chip, two chips per the number of players are drawn from the bag and placed in the cup. They are shaken and poured out with the others already out on the table. If this re-roll occurs, the giant may be able to smash a player’s troop. If a player has a total of 7 or more shown on their own colored chips, that player then has to choose one of their troop cards to be discarded. That player can then turn any number of their colored tokens over so that the number side is face down.

The next action is to hire a troop. To do this a player will choose one of their cards that they drafted earlier and pay the cost in gold tokens as designated by the card. That card is then placed face up in front of the player. Only one card may be hired per turn. The gold chips are then placed back in the bag. If a player chooses not to hire, they may draw a random token from the bag instead.

The last action is to attack a giant. To do this, the player chooses one of the numbered circle tokens on one of the giants. They then must pay the activation cost on one or more of their cards. If the damaged produced is greater than or equal to the number large number printed on the token, the player removes that token from the giant, placing it in front of them. Some effects from the cards will take place after the combat unless they have to do with combat damage. The giant is killed when all 4 of the numbered tokens have been removed from the standup. Victory points and chips are then received. Each player that has one of the numbered tokens from that particular giant will roll dice equal to the number shown at the top of the standup. If the player rolls equal to or higher than the dice shown on the token, they may choose to take either a victory point token or a random token from the bag. If they roll lower they may only take a random token. One token is taken for each die rolled. The dead giant’s standup is set aside. If a player decides that they do not wish to attack, they can draw one random token from the bag.

This all continues with each player drafting chips, hiring troops and attacking giants until the last giant is killed. The players then add up their victory points. The player with the most points wins. 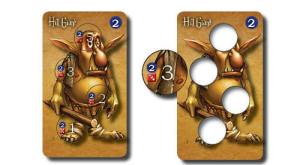 COMPONENTS
There are a lot of really great looking components in this game. The giants are really large thick cardboard that fit snugly inside the plastic holders. The tokens are easily punched out. The artwork on these is amazing. It has a real fun fantasy feel to it. The defender cards echo that same feeling. The artwork is really nice and the cards are very good quality. The flag cards fit nicely inside their plastic stands as well and help determine each player’s color. The different tokens are all really thick cardboard and look really nice. The bag is good quality and is large enough to fit you hand down into. The dice are good quality and roll well enough. The only thing missing is a cup to place the tokens in after they’ve been drawn from the bag. That’s easily taken care of through the use of a red solo cup or whatever kind of cup that you have laying around. If you’re really hard pressed, I’d think that you can just put them in your hands and shake them up. That’s if your hands are big enough. In any case, it’s not a big deal. I’m really impressed with the quality of each piece.
10 out of 10

RULEBOOK
The rulebook for this game is pretty simple. It’s in full color and has lots of pictures of the components as well as examples of how to play the game. Everything is explained really well. It’s really simple to read and understand. I didn’t find anything that looked difficult at all. I really have no complaints. It’s nice enough and does what it needs to do.
9 out of 10

GAMEPLAY
The game itself is loads of fun. Having these large stand ups makes me think of King of Tokyo but the gameplay makes me think a little of 7 Wonders. It’s a really odd combination but the game works on so many levels. I really love a good drafting game and this game starts off with that. It then adds to that by drafting chips throughout the rest of the game. Later you’re attacking the giants in more of a King of Tokyo feel using cards instead of dice. I really love the simpleness of this game. It’s easy enough that younger teens can definitely play it. It’s not a super fast game but it goes by quick enough with most games lasting a little over an hour. There’s really nothing difficult about the game at all. It’s just a lot of fun.
9 out of 10

OVERALL
Giant is a light weight game of keeping the kingdom safe by killing giants. The artwork in this game is amazing. When I opened the box, I immediately fell in love with this game. Those giant stand ups are amazing. The game is average in length with most games lasting a little over an hour. The game plays a bit like King of Tokyo and 7 Wonders had a illegitimate baby. Fans of those games should most definitely love this one. I’d even think that Lord of the Rings and other fantasy games should like this one as well. The game is really simple and easy enough for younger teens to play. I would highly recommend it. It’s fun for everyone. I greatly enjoy this one and will definitely be playing it many more times.
9 out of 10

For more information about this and other great games, please check out Joe Magic Games at their site.

Check out the Kickstarter link and back it today.

I'm a happily married man with 2 wonderful kids. I love my family very much. I'm a big fan of board, card and RPG games and have been playing for over 20 years. As a board and card game reviewer, I'm hoping that this blog will inform, educate and entertain you. If you like it, please tell your friends and have them join in on the conversations. Thanks and GAME ON!!
View all posts by Gaming Bits - Jonathan Nelson →
This entry was posted in Reviews and tagged board, board games, card, card games, games, giant, hanny, joe, joe magic games, magic, mark, mark hanny. Bookmark the permalink.