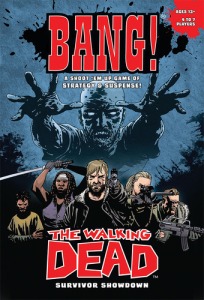 Bang! The Walking Dead is a game published by USAopoly. It is for 4-7 players. In this game, players will become characters from the Walking Dead comics. They will take on 1 of 4 different roles in a battle for survival. The player or players that can survive the longest while killing off the other players will be declared the winner.

The game is based on the original Bang! and is played in a series of turns. Each turn consists of 3 phases; draw 2 cards, play any number of cards and discard excess cards. The leader begins the game and play continues in clockwise order. In the first phase of play, players will draw 2 cards from the deck.
In the second phase, players are able to play any number of cards from their hand. These can be of any kind or type, however there are a few governing rules for playing cards. The first thing is that only 1 Attack! card can be played per turn. Players can only have 1 copy of any one card in play. Players can only have 1 weapon in play. There are lots of different cards that can be used from first aid and medical supplies to walkers, grenades and surprise attacks. There are even cards that can help you out like the RV or scope cards. The main thing to remember is that weapons have a distance on them. That distance is how equaled by how many places are between you and the player that you’re trying to attack. If your distance is equal or less than the card that you want to attack someone with, you can use it. Any player that loses their last health is eliminated from the game. The player must then reveal their role card and discard their hand and any cards they had in play.

The last phase is to discard excess cards. Players must discard cards down to the amount of health their character has. For example, if your character only has 3 health left, then you can only have 3 cards in your hand after this phase. 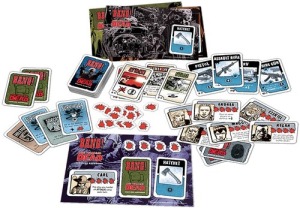 COMPONENTS
This game looks Amazing! The cards look fantastic and have lots of great artwork from the Walking Dead comics series. I love the fact that there are SO many different characters available to play. There are 16 in total, from Rick and Michonne to the Governor and Negan. Most of the characters that you’d love to see are here. The player boards are really well made as well, as are the health tokens that resemble little red blood splots or bullet holes. I haven’t decide which it is yet. Everything for this game is so nice and it draws you into the theme so well. This is definitely one of the best looking games.
10 out of 10

RULEBOOK
The rulebook for this game is extremely well designed. Everything is in full color and looks great, just like the components. Everything is explained really well including all of the iconography on the cards. Each card type is explained thoroughly as are specific cards. There’s even a section that gives a breakdown of the health and abilities of each of the characters. There are lots of pictures as well as lots of examples of gameplay. This is a beautiful looking book that adds a lot to the game.
10 out of 10

GAMEPLAY
This is a super fun game. It is based on the original game Bang!. Let me tell you that having never played Bang! before I wondered how good this would be. It’s great, that’s how good it is. This theme was the right fit to be made into a game of Bang!. It is so good. Everything is really simple and it is great for a large number of players. There are actually quite a bit of choices from the cards. I love how quick the game plays as well. Most games take no more than 30 minutes. It can be learned very quickly and is easy to play. It will take you a few minutes to learn the difference between the icons and what each does but once you’ve learned them, you’re good to go. Needless to say, this is great fun.
10 out of 10

OVERALL
Bang! The Walking Dead is a light game of player elimination with a Walking Dead theme. This is a simple game to learn and play and is great fun for fairly large groups of players. The components are great and the Walking Dead theme fits perfectly with the game. The comic style looks fantastic and the artwork is great. The game is relatively short with most games lasting no more than 30 minutes. I like this game a lot. Fans of the Walking Dead as well as the original Bang! should enjoy this one greatly. I highly recommend it.
10 out of 10

For more information and this and other great games, please check out USAopoly at their site.

I'm a happily married man with 2 wonderful kids. I love my family very much. I'm a big fan of board, card and RPG games and have been playing for over 20 years. As a board and card game reviewer, I'm hoping that this blog will inform, educate and entertain you. If you like it, please tell your friends and have them join in on the conversations. Thanks and GAME ON!!
View all posts by Gaming Bits - Jonathan Nelson →
This entry was posted in Reviews and tagged bang!, board, board games, card, card games, dead, games, usaopoly, walking, walking dead. Bookmark the permalink.