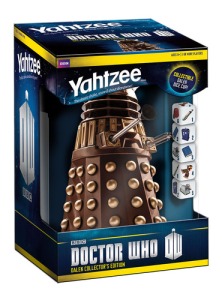 Yahtzee: Doctor Who Dalek Collector’s Edition is a game published by USAopoly. It is for 1 or more players. In this game, players will be rolling dice and scoring points just like in the classic game of Yahtzee. The twist is that the dice and the dice cup have been given the Doctor Who treatment. Just like in Yahtzee, the player with the most points at the end of the game is declared the winner.

To begin, players should familiarize themselves with the different dice symbols to determine the number value that each symbol represents. Each player is given a score card and the pencil is placed within easy reach of all players. The first player is chosen and given the dice which are then placed inside the Dalek cup. Play now begins.

On a players turn, they will roll the dice. They must then choose which dice to keep and which to re-roll. The player is allowed to re-roll the dice twice before scoring. After the third and final roll, the player must fill in one of the boxes on their score card with either a score or a zero. Play then passes to the next player.

Of course just like in regular Yahtzee, scoring is done by which column is chosen to be filled in. There are 6 boxes, one for each number 1-6 on the die. Each row is added individually as is the two boxes for 3 of a kind and 4 of a kind and the chance box. The boxes for full house, small straight, large straight and Yahtzee score between 25 and 50 points respectively. There are also bonus points that can be awarded. Once all 13 category boxes are filled in, the game ends. Players add up their scores and the person with the highest total points wins. 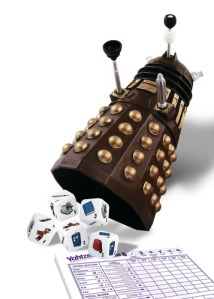 COMPONENTS
This is a beautiful collector’s piece along with some great game pieces. The Dalek dice cup is amazing looking and it could easily be sat on your desk at work or put in a place of honor. It’s that well designed and made. The dice have lots of great pictures of such iconic designs as the T.A.R.D.I.S., sonic screwdriver and the fez all from Matt Smith’s Doctor. The little wooden golf pencil is standard fare in this type of game as is the score pad. Nothing out of the way from your standard Yahtzee game. Still, the detail and design of the dice and dice cup are completely amazing and make this great for fans of Doctor Who, like me.
10 out of 10

RULEBOOK
The rulebook is black and white. Inside are several pictures as well as examples. Everything is explained extremely well. There are even rules for solo play. It’s pretty plain and ordinary, however it is designed really well. Of course the game of Yahtzee isn’t one that is difficult to understand anyway. Still for those people that might need a refresher course or a bit of an update on scoring then this will help. In any case, it’s not bad.
8 out of 10

GAMEPLAY
Of course this game is a thematic version of the classic game of Yahtzee. The only real changes are the dice cup and the dice. That said, the redesign is beautiful. I’ve always loved Yahtzee and the whole dice rolling mechanic. As a matter of fact, Yahtzee may have been my first dice rolling game ever. The game plays exactly the same but looks so much better. I love the thematic design very much as I’m a HUGE Doctor Who fan. The game is one that appeals to pretty much everyone but the Dalek dice cup gets a lot of attention from my non gamer friends. Of course this makes them want to play it then. Any excuse to get a friend interested in playing a game makes this a victory in my book.
9 out of 10

OVERALL
Yahtzee: Doctor Who Dalek Collector’s Edition is a light game of dice rolling based on the classic game of Yahtzee. The theme and design of everything looks absolutely gorgeous. I love the Dalek dice cup and the dice are quite great as well. Fans of Yahtzee and/or Doctor Who will love this game. It’s really simple and easy to play. It’s a great game to interest your non gamer friends with very little to have to teach them. As an introductory game it’s great and looks fantastic to boot. I love every aspect of this and look forward to rolling the dice many many more times. It’s even a game that the kids can enjoy playing. I love it.
9 out of 10

For more information and this and other great games, please check out USAopoly at their site.

I'm a happily married man with 2 wonderful kids. I love my family very much. I'm a big fan of board, card and RPG games and have been playing for over 20 years. As a board and card game reviewer, I'm hoping that this blog will inform, educate and entertain you. If you like it, please tell your friends and have them join in on the conversations. Thanks and GAME ON!!
View all posts by Gaming Bits - Jonathan Nelson →
This entry was posted in Reviews and tagged board, board games, card, card games, collector, collector's edition, dalek, dalek collector's edition, doctor, doctor who, edition, games, usaopoly, who. Bookmark the permalink.