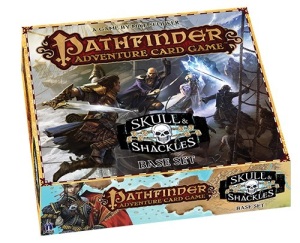 Pathfinder Adventure Card Game: Skull & Shackles is a game by Mike Selinker, published by Paizo Publishing. It is for 1-4 players. However if you add the Character Add-On Deck, it will play up to 6 players. The game comes with the first of a series of Adventure decks titled The Wormwood Mutiny. This is the first chapter of the Skull & Shackles storyline. More Adventure decks will be available later. I will discuss some of those in a later entry, for now I will be discussing only the base set. The Adventure deck that is included is based on the Pathfinder RPG adventure of the same name. In this game, a player or players will take on the fantasy challenges of a traditional RPG but in board game form. Along the way, they will add allies, acquire items, blessings and spells, fight monsters and try to thwart the most vile of villains and the henchmen that support them. The players will only have a certain amount of time to find the villain and defeat him before time runs out. If the players can beat the main villain, they will be declared the winners.

To begin, each player will choose a character, either from the base set or the add-on deck. The players will either build a deck for that character based on the requirements on the character card or they can start with pre-generated decks found in the back of the rule book. Next, the players must decide if they’re playing a scenario, adventure or campaign. The appropriate card for each describe what the starting locations will be in the scenario and how to set up the decks for each, usually adding monsters, items and so forth. Villains and henchmen are added randomly, one to a location deck and then shuffled. The Blessings deck is made from 30 blessing cards. This is the timer for the game. When it runs out of cards, the game is over and the players lose, unless they have found and defeated the villain. New to this set is the party’s ship. In this game, the party will always have a ship. This is checked off on the party’s fleet card. Bigger and better ships will become available as player’s progress. The ship is placed next to the scenario card unless it’s anchored next to a specific location as designated by certain scenario cards. Once the ship has been placed, a plunder card is stashed underneath it facedown. Token cards that represent the characters are placed at a location of the players choosing. Starting hands are drawn dependent on what the character card says, and play can now begin.

The game is played in a series of steps. On a players turn several things happen in order. First, the player advances the Blessings deck by flipping over the top card into the discard pile. Next, they may give a card to another player who’s character token is at the same location as theirs. Next they may move their token to another location. If there are other characters at their location and the party’s ship is not anchored at a location, they may move with you via the ship. They may then explore the location by flipping the top card of that location. This may only be done once unless other played cards allow an extra explore. When exploring, the players will either encounter boons or banes. They may also encounter ships. If they are commanding the ship at the time the player must attempt to defeat it much like a bane. If the player is successful and their ship is not wrecked they may stash a plunder card. Players must be careful not to take too much structural damage to their ship or they risk losing it. If the card drawn is a boon, the player may attempt to acquire it by rolling a skill check with the dice provided and/or adding cards to help. If they meet or exceed the number the boon is placed in the players hand. If the players reveal a bane when exploring, they must try to defeat it. Again, skills and played cards are added to the dice roll to try to meet or exceed the number on the card. If the player beats it, the bane is removed and play continues. If the player is unable to defeat the bane, damage is applied to the character in the form of discarding cards equal to the damage taken. A player’s hit points is determined by the number of cards in their deck. If the player runs out of cards, their character is dead and effectively out of the rest of that adventure. At this point, characters may attempt to close the location if there are no cards remaining at the location. This is done by performing a skill check as designated by the location card. The player then resets their hand back to the starting number of cards and play passes to the next player.

One extra thing that is new in this set is the inclusion of ships. As stated earlier, the party begins with one particular ship but may gain more and better ships later as rewards. After the scenario or adventure, players may adjust their decks based on any new cards acquired and raise skills and feats if available. They must still have the correct amount of cards in their deck as stated by the character card. The player is now ready to begin a new adventure or scenario. 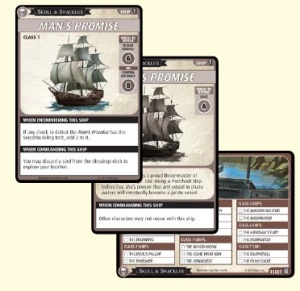 COMPONENTS
This game contains a LOT of cards. I mean a LOT! That’s just for the base game. The box is huge and has a really great divider for keeping everything separated once you open up all the packages inside. There’s a lot of room for expansions which is good, since like the last game there will be several new expansions on the way. The artwork on the cards is really amazing looking. It has a lot of similarities to the artwork that you’d normally find in one of the Pathfinder RPG books. The cards are really nice and sturdy. The game also comes with some generic gaming dice. They’re pretty plain but they get the job done. I usually like to drag out my own collection of dice and have different sets for each player, just like I would in a normal RPG gaming session. The game looks really nice and appears to have made things a bit bigger and better.
10 out of 10

RULEBOOK
The rulebook for this one is even bigger than the previous version of Pathfinder. It’s a whopping 32 pages. It will take quite a bit of time to read through all the information presented here. However if you’re already familiar with the game, you can simply looking for the shaded sidebars that highlight the new additions and changes to the game. Even with the size of the book, everything is fairly straight forward and easy to read. There are quite a lot of pictures throughout the book including examples and such. Just like in the previous version, this one has a great picture of how the game should look when set up. This book also has some great illustrations of the different characters along with a description of each. Everything is explained really well and you should have no problems understanding the rules of the game. There are suggested deck lists for each character to help first time players with setting up their decks. Also the last page has a great reference sheet for the basics of the game from turn overview to encountering villains. Just like the previous version, I’m very impressed with the layout and design of the book.
9 out of 10

GAMEPLAY
This game is really quite a lot of fun. Just like the previous version it feels like a RPG campaign in a box. The sense of urgency to find the major villain of the scenario is still there. The new addition of the ships is quite interesting. I like the idea of being able to take other characters along with you through the use of the ship. The game really works best as a co-op game but can be played solo. I enjoy the solo game quite a bit, but find the co-op to be better. There are always more locations to explore and that just makes things better in my opinion. I really like that you can level up your characters from scenario to scenario and that you can change up your deck to the way you want. That makes this a very customizable game which is something I really love. The theme comes through really well and it adds a lot of fun to the game. The ship aspect adds a bit more depth but isn’t overpowering. All in all, it’s really quite good and well put together.
9 out of 10

OVERALL
Pathfinder Adventure Card Game: Skull & Shackles Base Set is a medium weight game of exploration on the high seas. There are lots of aspects of deck building along with hand management as well. The play time for this one is quite long, averaging about an hour and half to two hours. That’s quite a long time but with more players it tends to be more fun. The artwork is really amazing and it has a great pirate style theme to it. Fans of the Rise of the Runelords Base Set as well as exploration games should really enjoy this one. The game isn’t that difficult to learn. Veteran players of the original base set should have no trouble adapting to this new version. There is quite a lot of customization and is set up for lots of expansions which leads to lots of replayability. This game is fun for solo players as well as multi players. All in all, it’s really enjoyable and one that should definitely be picked up, especially if you liked the first one. I highly recommend it.
9 out of 10

Check out my review of the Character Add-On Deck here.

Also, check out my review of the 2nd Adventure Deck, The Raiders of the Fever Sea here.

For more information about this and other great games, please check out Paizo Publishing at their site.

I'm a happily married man with 2 wonderful kids. I love my family very much. I'm a big fan of board, card and RPG games and have been playing for over 20 years. As a board and card game reviewer, I'm hoping that this blog will inform, educate and entertain you. If you like it, please tell your friends and have them join in on the conversations. Thanks and GAME ON!!
View all posts by Gaming Bits - Jonathan Nelson →
This entry was posted in Reviews and tagged adventure, base, base set, board, board games, card, card games, games, mike, mike selinker, paizo, paizo publishing, pathfinder, publishing, selinker, set, shackles, skull, skull & shackles. Bookmark the permalink.