Hoyuk meets Anatolia on Kickstarter! Win a Copy of the game! 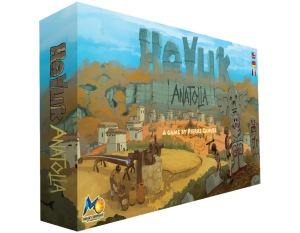 I recently received information from MAGE Company that they are currently Kickstarting an expansion for a game that I reviewed not that long ago, Höyük.  The expansion is called Höyük: Anatolia.  Here’s a description of the game:

The world is moving into a new era, and now more than ever the clans work for the progress and the evolution of their community. Everyone tries to find new ways to improve their lives, new means to grow their lands and new constructions that create an easier life. In Höyük: Anatolia, you must prove your quality through three different Achievements: build a Water Supply System for your village so the water can reach your land, throw the best Fest in the valley, and finally, build two Artifacts!

Each player chooses to complete two different Achievements at the beginning of the game. Each player who has managed to keep their Achievements intact until the end of the game will score additional Victory Points but most importantly each Achievement will score a different amount of points. The players use Drop counters in order to build the Water Supply System. Five Drop counters must be placed on five Houses of the same color and of the same Block. Furthermore these Houses must be connected to each other and at least one of them must be placed on the river or the lake of the game board. To place a Drop counter on a House, players must wait until the Construction phase and then choose not to build one of three Elements of their Construction board.

The Artifacts can be built easily but can be destroyed as easy as well because they are affected by all Catastrophes. Players can build an Artifact on the top of their Houses at the same way as the Drop Counters but in this case this House must be 2 stories high. If players do not complete this Achievement by the end of the game, they can still score Victory points. This is the only Achievement that has an advantage but it also gives less Victory Points. 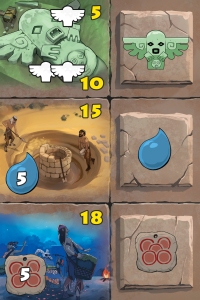 This is an era where tribes search for a way to upgrade their social status, so they throw several Fests where they meet each other and celebrate. This is the last Achievement where players create the best Fest in the Valley by offering five different materials. These materials can be found on the Fest tokens but also on the Aspect cards. The Aspect cards have different images that must be matched with the Fest tokens. Once players have five Aspect cards that match with five Fest tokens, they discard them to score Victory points at the end of the game.

Doesn’t that sound GREAT?  Here’s the best part.  MAGE Company is graciously providing a copy of the expansion to one of my loyal readers.  To win, here’s all that you have to do.  Simply, do a little research and answer the following 10 questions.  Then you will send them to me in an email at doublew17@gmail.com with the subject line, Hoyuk Contest.  You will receive 1 entry for each correct answer.  You may only enter once for a maximum of 10 possible entries in the drawing.  The contest will run until midnight on January 26th.  I’ll randomly choose a winner from the correct answers on January 27th.  I’ll post the winner’s name that morning and they will then have 48 hours to contact me via email or I’ll choose another winner.

In this contest, you will answer some trivia questions. Answers can be found on the Kickstarter page: https://www.kickstarter.com/projects/magecompany/hoyuk-anatolia

Question 2: Which one of the three Achievements in Hoyuk: Anatolia does not get affected by any means?
a. The Artifacts
b. The Fest
c. The Water Supply System
d. None of them

Question 8: How many Achievements can a player choose to complete in Hoyuk: Anatolia?
a. 1
b. 3
c. 2
d. There are no Achievements

I'm a happily married man with 2 wonderful kids. I love my family very much. I'm a big fan of board, card and RPG games and have been playing for over 20 years. As a board and card game reviewer, I'm hoping that this blog will inform, educate and entertain you. If you like it, please tell your friends and have them join in on the conversations. Thanks and GAME ON!!
View all posts by Gaming Bits - Jonathan Nelson →
This entry was posted in Personal Notes and tagged anatolia, board, board games, canuel, card, card games, company, games, hoyuk, hoyuk anatolia, mage, mage company, pierre, Pierre Canuel. Bookmark the permalink.