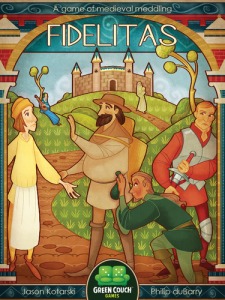 Fidelitas is a game by Jason Kotarski and Philip duBarry, published by Green Couch Games. It is for 1-4 players. In this game, players will be trying to gain influence in certain areas of a medieval city by using the actions provided them by certain characters. They will be trying to fulfill certain secret objectives to gain victory points. The player that is best able to maneuver characters to fulfill their objectives will be declared the winner.

To begin, the 5 location cards are placed in a row in the middle of the table in numerical order. The castle and harbor cards are placed on either end crossways. The Virtus cards are shuffled and one card is randomly placed next to each of the ten locations skipping the castle and harbor. Players are each dealt 2 Virtus cards. The rest of the cards are placed facedown in a pile near the city. The Missio cards are shuffled and each player is dealt 2 of these as well. The rest of these cards are also placed facedown in a pile. The starting player is chosen and given the start player token. Play now begins.
On a player’s turn, they will follow 3 steps; play a Virtus card and carry out the action it triggers, score one or more Missio cards if possible and draw replacement cards. The first step is to play a Virtus card and carry out the action it triggers. To do this, the player will play one of their cards to one of the locations in the city, allowing the guild symbol to remain visible. When playing a character to a regular location, the guild icons must match if there is a location in the city that matches it. If there is not a match, the card can be played anywhere. The player can play to the tavern instead, if they so choose. When playing a character to the tavern, the action that the card provides is ignored. Instead, the top card from the Virtus deck is played to the opposite side of the tavern. The player is then allowed to discard one of their Missio cards and replace it by drawing a new card. The discarded Missio card is placed on the bottom of the deck.

The next step is to score one or more Missio cards if possible. To do this, the player will check to see if the conditions on one or both of their Missio cards has been met. If so, they may place it face up on the table in front of them.

The game continues until a player reaches a certain amount of points, determined by the number of players. Once that number is reached, play continues until the player to the right of the start player token finishes one last turn. The game can also end if the Virtus deck has been exhausted a second time. In this case, the game ends immediately. The player with the most points is the winner.

COMPONENTS
The game contains only cards, lots of cards. The artwork on these cards is top notch. I really love the character designs of each one. The quality of the cards is really good as well. They have a really nice finish to them and they are fairly thick. Both the Missio and Virtus cards are easily separated due to the different backings. There are also reference cards and the Manu Forti expansion cards as well. The theme seems to really come through on everything from the characters to the locations. All in all, the cards look great and are really great quality.
8 out of 10

RULEBOOK
The rulebook for this game is small enough to fit inside the small card box that the game comes in. There are lots of great pictures and tons of examples. There even a great setup picture for reference. Everything is explained really well and there’s nothing difficult about the rules at all. There is a really nice breakdown of the difference between Virtus and Missio cards. There are also variant rules for playing a 4 player team game as well as a great solo variant. There’s also a new city variant which randomly sets up the locations. Finally there are rules for the Manu Forti Expansion that comes included in the game. Everything for the expansion is laid out plain and simple. The rulebook is nice and colorful and has a nice finish to it. It looks nice and is laid out really well.
8 out of 10

GAMEPLAY
The game is quite simple and can easily be explained in a few minutes. It plays well with either single or multi players. Of course the single player game is a bit different in that the tavern is not included in the setup for the game. There’s not a great deal of depth to it but it does have a bit of strategy involved with it. Choosing when to play certain characters and even where to play them can be very important. The game isn’t hard at all. It’s simply play a card, take actions provided by the card that you played, complete missions if you can and draw new cards. That’s it. I love the simplicity of it and find that it is something that new players can easily learn without hours of explanation. I think that as a solo game it is lacking a little bit of the fun that I had with the multiplayer game. This really works best for me with 2 players. It’s not as chaotic and there’s a great give and take with the 2 player game. The solo game is good but I miss not having the tavern available to get rid of really hard missions from my hand. Of course, I don’t mind playing in either way. The setup is really quick as is the game play. Most game sessions last about 30 minutes making it a great warm up or filler game.
8 out of 10

OVERALL
Fidelitas is a light weight card game of gaining influence in a medieval city to complete your secret missions. It’s a short game with most sessions lasting around 30 minutes. It’s a nice warm up or filler game. The artwork is really great especially on the different characters for the Virtus cards. The card quality is really nice and each one is sturdy with a nice finish on it. The game is not hard and can easily be picked up by new players. It’s not very deep but it has enough strategy to it to make most players happy. Fans of games like Love Letter or Boss Monster might enjoy this one. I like the simplicity of the game and the ability to play it solo. I really find that it shines when played with 2 players. I would recommend it mainly as a 2 player game. It’s a really fun game that I enjoy. You should definitely give it a try.
8 out of 10

For more information about this and other great games, please check out Green Couch Games at their Facebook page.

I'm a happily married man with 2 wonderful kids. I love my family very much. I'm a big fan of board, card and RPG games and have been playing for over 20 years. As a board and card game reviewer, I'm hoping that this blog will inform, educate and entertain you. If you like it, please tell your friends and have them join in on the conversations. Thanks and GAME ON!!
View all posts by Gaming Bits - Jonathan Nelson →
This entry was posted in Reviews and tagged board, board games, card, card games, couch, dubarry, fidelitas, games, green, green couch games, jason, jason kotarski, kotarski, Philip, Philip duBarry. Bookmark the permalink.