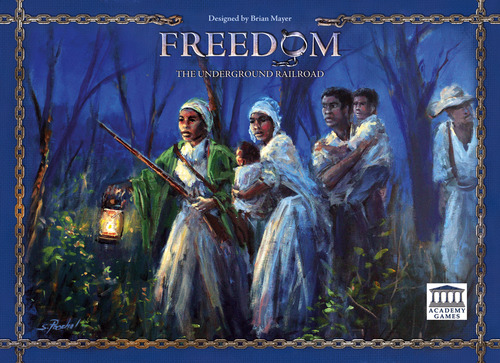 Freedom: The Underground Railroad is a game by Brian Mayer, published by Academy Games. It is for 1-4 players. In this game, players take on the role of Abolitionists during the time of slavery in the 1800’s. They will be working together to influence pivotal events in history, raising funds for the cause and escorting slaves to freedom in Canada. If they are able to gain the support needed and move the required number of slaves before time runs out, they will be declared the winners.

The next step is the planning phase. In this phase, each player may take up to 2 tokens from the board beginning with the first time period. A token may only be taken if the player has the money available to purchase it. Support tokens are instrumental to winning the game. The conductor tokens allow a player to move slaves along the paths. Fundraising tokens help a player to raise money. Once the last support token in the active time period has been taken, the game is paused to take care of 2 effects. The Abolitionist card deck for the active time period is removed from the game leaving any cards in the queue where they are, then the next time period becomes active making it’s tokens available to purchase.

The third phase is the action phase. In this phase each player in turn order may take any actions that they would like from a list of actions. A player can take their role card’s benefit once per turn. They may also take it’s special ability. Once it’s taken they must turn their role card over to side II, signifying that the ability has been done. They can play a conductor token to move a certain number of slave tokens a specified number of spaces. They can also play fundraising tokens that give the player $1 for each slave token in a certain space. They are also able to buy and resolve a single abolitionist card. Some of these cards like the general cards are resolved immediately, while the reserve cards are saved on a player’s mat to be used when the player chooses. The opposition cards will negatively affect the game’s and it’s players however some of them can not be bought.

The next phase is the slave market phase. In this phase, slaves are moved from the bottom slave market card to any available plantation spaces on the bottom of the board. If there are no available spaces, the slave tokens are placed on the slaves lost track on the victory condition card. If the player has to add a slave to the card and there are no spaces, the players have lost the game. Once slaves are placed, the card is removed from the game and the current cards slide down. A new card is then placed in the top space of the row. Slave tokens are used to fill up the card just like at the beginning of the game.

The last phase is the lantern phase. In this phase, the abolitionist card queue is restocked from the current time period’s deck. Of course before restocking, a number of cards must be discarded from the right of the queue first depending on the number of players. All cards will slide to the right to fill up any empty spots and then cards are added to the left side to finish the row. Victory conditions are checked. If the conditions have not been met yet, then the lantern token is passed clockwise to the next player who becomes the lead player. A new round then begins.

Winning the game isn’t as easy as it might seem. To win, the players must purchase all the support tokens from each of the 3 time periods. They must also have moved all the required number of slave tokens on the victory condition card in Canada before the end of the eighth round. The game ends on the round that this happens, however the players must finish out the round without losing to win. If the players are able to do this, they are the winners. 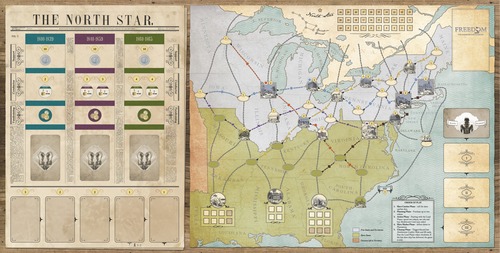 COMPONENTS
This game is a beautiful game with lots of history ingrained inside it. The cards are very high quality and each one has historical references to the different events and people that were important to the movement during these time periods. The tokens are all nice and thick cardboard and are easy to understand. The dice are very unique and are also easy to understand as well. The board is a beauty of design and divides the map and the time periods beautifully. The slave cubes are wooden and very sturdy. I absolutely love the look and feel of the game. You really get a great sense of theme in every piece. Even the backs of the cards have a real historical feel to them. Even the player mats pull you into the setting quite well. I can’t compliment the look of this game enough. Everything is high quality and well designed. I love it.
10 out of 10

RULEBOOK
The rulebook is a masterpiece just like the components. There are lots of great pictures throughout. There are tons of examples for playing the game through the book as well. Everything is explained really well. All of the different iconography is explained in detail as are the different aspects of the game including each of the game’s phases. The book even includes ways to adjust the difficulty for easier or harder games. There’s also rules for keeping score if players choose to do so. Every one of the cards are thoroughly explained including the role cards in a section of several pages. If that wasn’t enough to interest you, the last 2 pages are dedicated to the actual history behind the game from the different ages through the underground railroad. Overall, the book has a great looking design and is full of all kinds of information. I really feel like it is extremely well done.
10 out of 10

GAMEPLAY
I’m gonna go ahead and spoil things a bit, but I LOVE this game. It’s a bit abstract and unlike anything that I’ve played before but I love it. The complexity of the game’s design is so amazing and yet it’s a really simple game to play. There’s lots of strategy as you really have to think each move through. Like should I move this slave here even though it’s going to bring the slave catcher this direction and make it impossible for me to move my other slave forward. Can I afford to lose this slave to make it where this slave can move on ahead. The game is SO thematic. You will agonize over moves as you find yourself really wanting to get everyone free, but as in life, that won’t be the case. Sometimes you will have to make sacrifices as I’m sure was done during that time as well. The game is really beautiful and the theme is 100% a part of the game. I love that actual historic events are present in the different cards as are people that were influential during that time as well. Look, I could ramble on and on about how much I love the game and how pretty it is but in the end, it doesn’t matter. This is a great game and it must be played to believe.
10 out of 10

OVERALL
Freedom: The Underground Railroad is a light to medium weight game that lets players relive the historic actions of a group of abolitionists during the 1800’s. The game lasts anywhere from an hour to 2 hours depending on the number of players. The artwork and theme to the game are beautiful and rich with historic accuracy. I love that so many elements from that time period are prevalent in the cards as well as other aspects of the game. The game has quite a bit of strategy to it that will cause you to sometimes agonize over your next move. You will feel bad about sacrificing one slave to free others. I realize that the theme might put some people off and that it might not be everyone’s cup of tea, however it’s definitely a game that everyone should play. I can’t think of anyone that wouldn’t enjoy this game if they gave it a chance. Fans of games with a historic slant to them will love it as will abstract game players. The fact that there are varying degrees of difficulty should delight even the most hardcore of gamers. I have thoroughly enjoyed this game and can’t wait to play it even more. I highly recommend this game. It should be on your table today. You will love it.
10 out of 10

For more information about this and other great games, please check out Academy Games at their site.

I'm a happily married man with 2 wonderful kids. I love my family very much. I'm a big fan of board, card and RPG games and have been playing for over 20 years. As a board and card game reviewer, I'm hoping that this blog will inform, educate and entertain you. If you like it, please tell your friends and have them join in on the conversations. Thanks and GAME ON!!
View all posts by Gaming Bits - Jonathan Nelson →
This entry was posted in Reviews and tagged academy, academy games, board, board games, brian, brian mayer, card, card games, freedom, games, mayer, railroad, underground, underground railroad. Bookmark the permalink.