The Walking Dead Board Game: The Best Defense-Woodbury Expansion Review 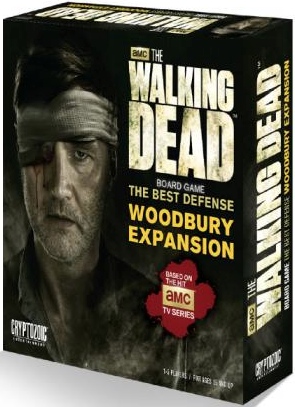 The Walking Dead Board Game: The Best Defense-Woodbury Expansion is designed by Matt Hyra and published by Cryptozoic Entertainment. This expansion adds a new resource deck, the Woodbury Location, the Governor and 5 new event cards. The game can now be played competitively with one player as the Governor. It also expands the game to 5 players.

For how to play the base game, check out the review here.

The Governor takes his turn last, after each player has finished with their turn. The black die is rolled. The Governor pawn is then moved that many spaces clockwise around the board. One resource card is discarded from the location where the Governor lands. When the combat phase happens, there are a few things to note. Silencer and Flashbang Grenade are used before any combat. Afterwards, Woodbury’s defense forces fire first, followed by the Governor. The survivors go last. 3 dice are rolled for Woodbury. Just like the survivors, for every 5 points a walker is killed. If there are no more walkers present the survivors are dealt 1 point of damage for every 5 points rolled. Walkers ignore any survivors on the Woodbury location and will only eat cards off of the Woodbury deck. If this deck is depleted, the Survivors win. This is an alternate win condition for the game.

After Woodbury has finished their combat, the Governor takes his turn. He attacks twice with his two combat dice. Once agains the walkers and once against survivors. He will roll his two combat dice, killing a walker at his location for every 5 points rolled. He will then roll the two dice again and do a point of damage for every 5 points rolled to a survivor(s) at his location. If there are multiple survivors in the same place, the players can determine who takes each point of damage. Walkers will ignore him and players can not attack him. When “The Governor Loses an Eye… and His Mind” card is drawn from the Woodbury deck, the Governor pawn is switched out for the 3 dice version which makes him a little more dangerous. Once the Governor has completed his turn, the survivors take their turns as described in the original rules.

The Governor can also be played in “versus mode” by a single player. The Governor player wins if the survivors lose. The Governor moves one space in any direction that the player chooses. The Governor character is not considered a survivor and does not draw event cards, become leader or benefits from any of the Leader’s abilities. Otherwise, the Governor plays like described above.

COMPONENTS
This expansions has several really great pieces that can be added to the original game. First off are the cards. There are 5 new event cards that are added to the event deck, as well as a completely new deck of resource cards for the Woodbury location. Just like the base game, the artwork is taken from production quality stills of the show and look great. There are also 2 Governor pawns that are made from thick cardboard with the nicer Governor, if there is such a thing, and the nastier Governor. A plastic base is included to place the pawn into. Just like the base game, I’d really have liked there to have been an extra one so that I don’ t have to keep swapping the pawns out. An additional combat die is included as are a few more game tokens. There is also the Woodbury location that is comprised of 2 large puzzle pieces that fit together to form the tile. Kinda cool idea to fit into a smaller box. I like the new stuff and find that it fits in well with the original pieces quite well. Really awesome stuff.
8 out of 10

RULEBOOK
The rulebook for this expansion is rather small and only consists of like 4 pages. There are a couple of really nice pictures and examples of gameplay. Everything is explained really well. Both the co-op and variant versus mode is explained thoroughly. There are also some additional notes included that explain certain cards and other points of interest when playing the game. There’s really not a lot to critique so I’ll just say that of what’s here, it’s really well done and fits well with the original.
9 out of 10

GAMEPLAY
I have to say that this expansion really adds another layer to an already great game. The tension is turned up several notches with the introduction of the Governor. It’s even more intense and dangerous when played in “versus mode”. This then makes the Governor a more thinking opponent instead of a random bad guy. I love what this does to the game. I mean, it’s the Governor! Who doesn’t love this guy? Playing as the Governor isn’t as detailed as playing a survivor but it is still a very enjoyable way to play. When playing co-op, you will absolutely HATE him, much like the survivors in the show. He can really mess up your day. I have to say that I do like the alternate win condition as well. It’s not really been much of a factor so far but when it happens I’m sure it will be quite epic. I do like the fact that zombies at Woodbury will not attack the players and will only concentrate on the resource deck. It’s really good to make sure that there are some zombies or other players that can handle some damage when going to Woodbury, that way you keep yourself safe. The goodies that you can find in the Woodbury deck are quite nice as well. I have to say, I prefer to play using this expansion. I doubt very seriously that I will ever go back to playing the original way again. It’s just much more fun. The game was good to begin with but this has definitely amped up the enjoyment value for me.
9 out of 10

OVERALL
The Walking Dead Board Game: The Best Defense-Woodbury Expansion is a great addition to the original game. It is really fun and adds a lot more enjoyment. It makes it possible for 5 players to play and introduces the Governor as either an antagonist or player character. Either way you choose to play it, it’s bad news for the survivors. It also introduces the Woodbury location and an alternative path to victory through the depletion of the new Woodbury resource deck. The artwork is comparable to the base game and adds lots of stock photos from the show that looks great. Zombie fans and Walking Dead fans alike will LOVE this expansion. If you have the base game, you MUST own this one. It adds a new level to the game. I do not see me playing without it. I highly recommend it. I say again, this is a MUST BUY for Best Defense owners. I love it and so will you.
9 out of 10

For more information about this and other great games, please check out Cryptozoic Entertainment at their site.

I'm a happily married man with 2 wonderful kids. I love my family very much. I'm a big fan of board, card and RPG games and have been playing for over 20 years. As a board and card game reviewer, I'm hoping that this blog will inform, educate and entertain you. If you like it, please tell your friends and have them join in on the conversations. Thanks and GAME ON!!
View all posts by Gaming Bits - Jonathan Nelson →
This entry was posted in Reviews and tagged best, best defense, board, board games, card, card games, cryptozoic, cryptozoic entertainment, dead, defense, entertainment, games, hyra, matt, matt hyra, walking, walking dead, woodbury. Bookmark the permalink.