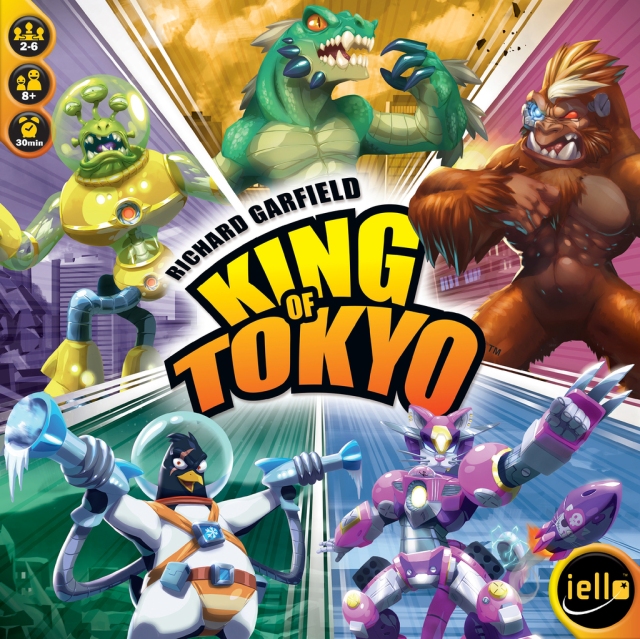 King of Tokyo is a game by Richard Garfield, published by IELLO. It is for 2-6 players. In this game, players take on the role of a Japanese Kaiju or Strange Beast. Each player will choose one of the gigantic monsters as they do their best to destroy the city of Tokyo and everything in their path, including the other players. The player that can do this the best will be declared the winner.

To begin, each player chooses one of the monster figures and takes it and it’s corresponding monster board. Players should set their life points (heart) to 10 and their victory points (star) to 0. The Tokyo board is placed in the middle of the play area. The cards are shuffled and placed face down near the board. The first 3 cards from the deck are drawn and placed face up next to the board. The large black dice are placed in the center of the table where all players can reach them. The green dice are set aside, but still within reach for use later. The green energy cubes are placed near the board where players can reach them as well. The first player is chosen and play now begins.

A player’s turn consists of 5 steps; roll dice, resolve dice, enter Tokyo, buy power cards, and end of turn. The first step is to roll dice. To do this the player will take the 6 black dice and roll them. The player may also roll 1 or 2 of the green dice, if they have a power card that allows them to use it. Once the dice have been rolled, the player is then allowed to set aside any of the dice with results that they like. They then can roll any unliked dice. Once more they are allowed to set aside any dice with results they like and, if they have changed their mind they can move dice that they set aside earlier and reroll them along with any other dice they don’t like. Once a player has either decided to keep all their rolled dice or they’ve rolled 3 times, they may then move on to the next step.

The second step is to resolve dice. Dice may be resolved in any order but each die must be resolved depending on the results. If a player rolls 3 of a kind of either the number 1, 2, or 3, the player gains that many victory points. Any additional dice with the same number gains another victory point. If a player rolls an energy bolt, they gain 1 energy cube from the pool, placing it in front of themself to be spent later. If a player rolls a clawed hand, they smash the other player(s). If their monster is in Tokyo, they damage all monsters outside of Tokyo for each claw rolled. If their monster is outside of Tokyo, any monster inside Tokyo is damaged by 1 point for each claw rolled. Those monsters can then yield and leave Tokyo or choose to stay if they wish. If a monster loses it’s last life point, it is eliminated and any cards and energy cubes that the player had, are discarded. If a player rolles a heart and they are outside Tokyo, they will gain 1 health for each heart rolled. If they are in Tokyo, then they are not allowed to regain health this way. Also, players cannot gain above 10 health this way.

The fourth step is to buy power cards. The player is allowed to buy any of the face up power cards as long as they have the energy cubes to pay for them. Any cards that are bought are immediately replaced from the top of the deck. The player is also allowed to sweep all 3 face up cards and reveal 3 new cards from the deck for a cost of 2 energy cubes. The player may buy and sweep cards as long as they have the energy to pay for it.

The final step is the end of turn. In this step, some power cards activate. Most of the time, there is nothing to do here except to pass the dice to the next player, ending their turn.

The game continues with players rolling dice, buying cards and the like until either a monster reaches 20 victory points or there is only 1 monster left standing. The monster that does either of these is the winner and is crowned King of Tokyo.

COMPONENTS
Since this is the Fifth Anniversary edition of the game, I thought that I’d take this time to discuss the changes between this version and the first. Of course, the first thing any player will notice is the box. The monsters are featured more prominently than before. Inside the box is a lot more changes. For one thing the monsters have all been updated and/or changed graphically. Old favorites like Gigazaur and The King have new looks, as well as Alienoid and Meca Dragon. Unfortunately a few monsters were cut from the game and replaced with new monsters. Cyber Bunny has now been replaced with Cyber Kitty. Personally I really like that choice, as who doesn’t like a good Neko. The one thing that bothered me was the loss of the Kraken, my favorite character. He’s replaced by the Space Penguin, which was a fairly elusive promo. I’ve always wanted to add the Space Penguin but really hate losing my Cthulhu like Kraken. Oh well, moving on. Also updated is the Tokyo board. In the first edition game, the board showed a lot more fires and helicopters flying around. This version looks a little bit tamer and not quite as destructive. Not sure why this is, but I never paid all that much attention to the board anyway. Another updated element are the cards. These have all had a graphics update. As you can see from the pictures, each card has new artwork both on the front and the back. I really like the new card backs. It just makes more sense and looks a little fresher to me. Plus, it’s really easy to tell which cards belong to which version of the game. I like a lot of the new updated cards, and find they look a lot cooler and a little more monstrous than in the previous version. Of course the game still comes with the extra large dice and small green energy cubes, which have not changed at all. This game also has some nice little tokens that come into play with certain power cards. It should also be noted that in the exclusive Target version, Gigazaur is replaced with Baby Gigazaur. As my version didn’t come from Target, I can’t really comment on that. I do however look forward to being able to add him to my game, in the near future. All in all, I’d have to say that the game has improved quite dramatically, at least in look. I’m very pleased overall.
9 out of 10 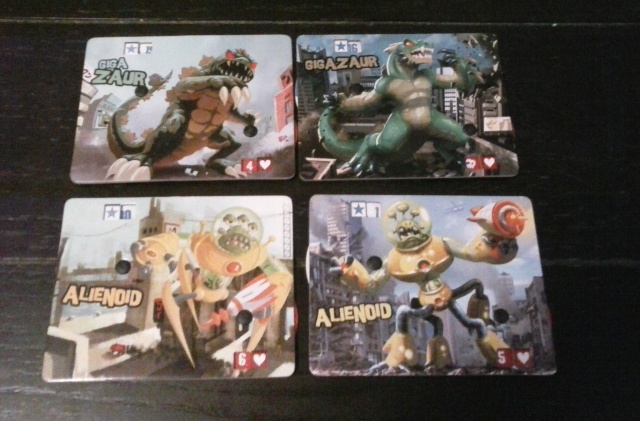 RULEBOOK
Much like the components, the rulebook has also gotten a bit of an updated look. Of course the game is packed with lots of great pictures and images throughout. Everything is explained really well and thoroughly. There’s nothing that’s difficult to understand. The book has a glossary of terms and a section for clarification of a couple of the power cards. This thing looks great. I mean, there’s not a lot of rulebooks that look as good as this one. I can’t complain about this one at all. Everything is expertly done without any errors. It looks and feels great.
9 out of 10

GAMEPLAY
As a fan and owner of the original game, I was very excited to see how this one would look. Believe me, it didn’t disappoint. This game has long been one of my all time favorite games. My whole family loves it, even the kids. I’ve taught the original game to lots of friends and family members over the years. Of course the question is, does this version hold up against the original? In my opinion, it surpasses it. Look, I love playing the original but this one’s even better. Yes, there’s nothing mechanically new to the game. It’s still the same Yahtzee style mechanic with a Godzilla like theme thrown on, but it makes sense and is a TON of fun. I’ve played this game with kids as young as 5 and adults in their 50’s and 60’s. Everyone loves it. There’s just something about rolling those huge dice and seeing those huge monsters stand ups that makes you love this game. Of course I look forward to a future expansion like the Power Up! one to add evolution cards to the 2 new monsters. Not that the game isn’t playable without them, just that with veteran players, it’s a lot more fun. I will say this though, without evolution cards, my son hasn’t beaten me quite as often as he normally does. So that’s a plus. Anyway, this game is absolutely one of the best out there and this new edition just puts more love into an already amazing and fun game. I love what’s been done with it and can’t wait for more.
10 out of 10

OVERALL
King of Tokyo is a dice rolling path of destruction wrapped up in a Godzilla vs. King Kong double feature theme. The game is fairly quick with most game sessions lasting no longer than about 30 minutes. It easily fits any number of players, but excels with 4 or more. The updated artwork and graphic designs in this new version are simply amazing. I’m overjoyed with how great everything looks. I do lament the passing of my old friend the Kraken but am thrilled to add the Space Penguin to the mix. The look and feel of the game is great. Everything has a bright shiny new look that I’m just thrilled about. There’s nothing really new as far as gameplay goes, but there was nothing wrong with the original. The game is amazingly fun and one of my all time favorites. Fans of Godzilla and King Kong movies as well as games like Yahtzee or pretty much any game that involves rolling dice, will LOVE this game. My kids love it. My wife loves it. Our friends and family love it. What’s not to love? It’s a great game to introduce to new players. It’s simple, fun and easy to learn and teach. I highly recommend picking up a copy of this game. Even if you’ve already got a copy of the older version, you’ll want this one too. You just can’t have enough monsters to play with and choose from. It’s well worth owning. Now I can’t wait for the next expansion.
10 out of 10

For more information about this and other great games, please check out IELLO Games at their site.

I'm a happily married man with 2 wonderful kids. I love my family very much. I'm a big fan of board, card and RPG games and have been playing for over 20 years. As a board and card game reviewer, I'm hoping that this blog will inform, educate and entertain you. If you like it, please tell your friends and have them join in on the conversations. Thanks and GAME ON!!
View all posts by Gaming Bits - Jonathan Nelson →
This entry was posted in Reviews and tagged board, board games, card, card games, games, garfield, iello, iello games, king, king of tokyo, richard, richard garfield, tokyo. Bookmark the permalink.