The Cohort is a game by Jeremie Kletzkine, published by Mage Company. It is for 2-6 players. In this game, players take on the role of a commander under Caesar’s command. They will be trying to be the first to assemble a Legion of military troops to prove their worth and thus be proclaimed the greatest commander. They will be assembling their Legion from a selection of many different types of troops into what’s known as a Cohort. The first player that can assemble 3 Cohorts to complete their Legion will be declared the winner.

To begin, the deck of cards are shuffled together and placed face down in the center of the play area. The first player is chosen and play now begins.

On a player’s turn, they will follow 3 steps. First the player takes 2 cards from the deck and looks at them. They then choose one card to keep and one card to give to another player of their choice. The card is placed in their hand. The next step is optional. In this step, the player is allowed to place a card from their hand face up onto the table in front of themself. This card becomes part of a Cohort. A Cohort is made up of a number of unit cards of the exact same type. Each of the different unit cards in the game have a number on them. This number is how many of that type of card are required to complete that particular Cohort. For instance, the Centurion has a number of 3 on it, meaning that it only takes 3 Centurions to complete a Cohort of these cards. However it takes 5 Legionary cards to complete a Cohort of their cards. Once a card has been played in a Cohort, the unit card’s effect becomes active and stays active until either the end of the game or until it’s Cohort has been completed. A player is allowed to build any number of Cohorts using different unit cards, however the more cards that the player uses, the more effects that the player will be forced to deal with. Once a Cohort has been completed, the player turns the set of cards face down and will no longer suffer the effects of that particular unit. The player then chooses another player who must discard their entire hand. The final step the player must take is to discard any extra cards from their hand, down to a maximum hand size of 4 cards. Play then passes to the next player. Once a player has completed 3 Cohorts, their Legion has been assembled and they are the winner.

It should be noted that there is one specific card in the deck that can be used as a wild card. That is the Primus Pilus card. When this card is played, the player choose 1 of 2 different effects. Either it can be used as a wild card to be added to an already established Cohort, or it can be discarded to force an opponent to discard a card from one of their Cohorts into the discard pile. If the player chooses the first option, they must distribute their hand of cards to the other players after playing it to their Cohort. 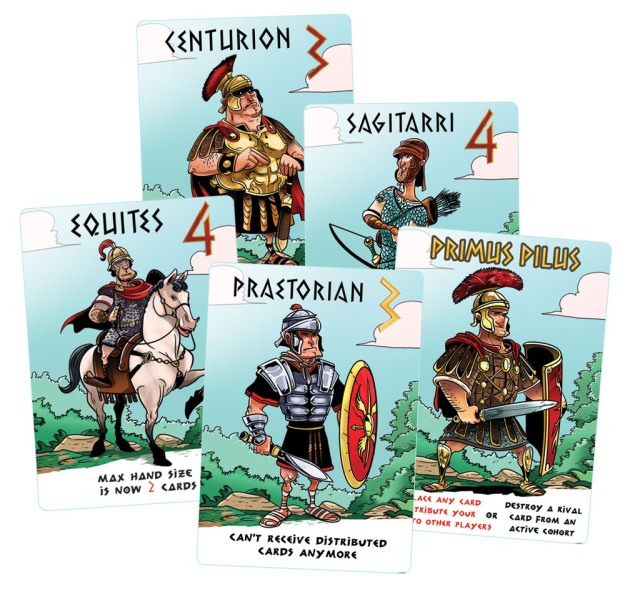 COMPONENTS
The only components that come with this game is a deck of cards. The artwork on them is pretty nice. I like the designs and find them to be really fun and cartoon like. In many ways they remind me of the Asterix and Obelix comics. The designs are very family friendly and aren’t bloody or graphic. The finish is pretty nice on the cards as well. There are only 2 things that bother me. One is that the cards are a bit thinner than I’d like them to be. They’re not bad, just not exactly a thickness that I feel comfortable shuffling a lot of times. I definitely recommend some card sleeves for this one. The other thing is that the box is a lot larger than the components. There’s tons of empty space in the box for the cards to slide around in. I was told by the company that the reason for this is that they plan on creating a lot more groups of cards through their upcoming kickstarter campaign. They said that they expect players to sleeve the cards and the box is big enough to fit the cards with sleeves perfectly. Not a bad idea actually. For now though, some foam inserts or a homemade tuck box make things a bit easier to deal with. All in all, I’m pretty good with the cards.
8 out of 10

RULEBOOK
The rulebook for this game is a bit of a mix up. To begin with, the book is only 4 pages long. The front cover explains the goal of the game with a reprint of the box cover. It’s the rest of the pages that are a bit scrambled. The last page should have been the 2nd page as this is where the set up and explanation of what a Legion are printed. From there it seems that some things got a bit jumbled on the interior 2nd and 3rd pages. It’s not that big of a deal since the book is only 4 pages long and it’s not that hard to understand. However, you do tend to expect things to be done better. I have been told that the company has contacted the printer about the mix up. It was a printing mistake that they plan to rectify. In any event, it’s really not a big thing. Just a bit weird the first time you see it. The book does have pictures and explanations on how each of the different cards work, including a special combo between the Sagittarii and Catapult cards. Much like the cards, I’m ok with it as well.
6 out of 10

GAMEPLAY
For being just a simple card game, this is surprisingly fast and fun. It’s family friendly and one that everyone can play. It’s really simple to learn. Simply put, you draw 2 cards and choose one to keep and one to give away. You then place a card to try to finish 3 groups of cards. That’s how simple the game can be explained. Of course it’s a bit more than just that since the different cards will affect you depending on which ones you have face up in front of yourself. Some effects are worse so these require fewer cards to finish while the less detrimental effects require more cards. It’s a neat little balancing act that comes down to luck of the draw many times. If you’re trying to get a specific card type and they’re all at the bottom of the deck, you’re screwed unless you realize this soon enough so that you can change your tactics. Like I said, the game is super simple. It’s really quick to play and is a really nice little filler card game. Most game sessions last no longer than about 30 minutes tops. Fans of simple card games like Love Letter or Fluxx should enjoy this one as well. There’s not a whole lot to it other than that. Nothing wrong with that.
8 out of 10

OVERALL
The Cohort is a light family friendly card game that is simple to play. The game is really quick and simple. Most game sessions take less than 30 minutes to play. The look of the game is fun and cartoon like. I like the artwork but am a little less than thrilled with the thinness of the cards. The box is an issue that should be rectified during the kickstarter with extra cards to fill the empty space. The rules are also an issue due to a misprint. This too should be fixed before the kickstarter launches. Fans of games like Love Letter and Fluxx should enjoy this one. It’s a really simple game that works as a light filler game. It’s nothing overly thrilling or exciting but it’s still fun to play. The game tends to rely a lot on luck of the draw, which I’m not all that crazy about. Still, this isn’t a bad game and is one that is fun to play with the family. Personally I find it to be entertaining and good with the right group of people. Give it a try. You might like it too.
7 out of 10

For more information and this and other great games, please check out Mage Company at their site.

I'm a happily married man with 2 wonderful kids. I love my family very much. I'm a big fan of board, card and RPG games and have been playing for over 20 years. As a board and card game reviewer, I'm hoping that this blog will inform, educate and entertain you. If you like it, please tell your friends and have them join in on the conversations. Thanks and GAME ON!!
View all posts by Gaming Bits - Jonathan Nelson →
This entry was posted in Reviews and tagged board, board games, card, card games, cohort, company, games, jeremie, Jeremie Kletzkine, kletzkine, mage, mage company, the cohort. Bookmark the permalink.