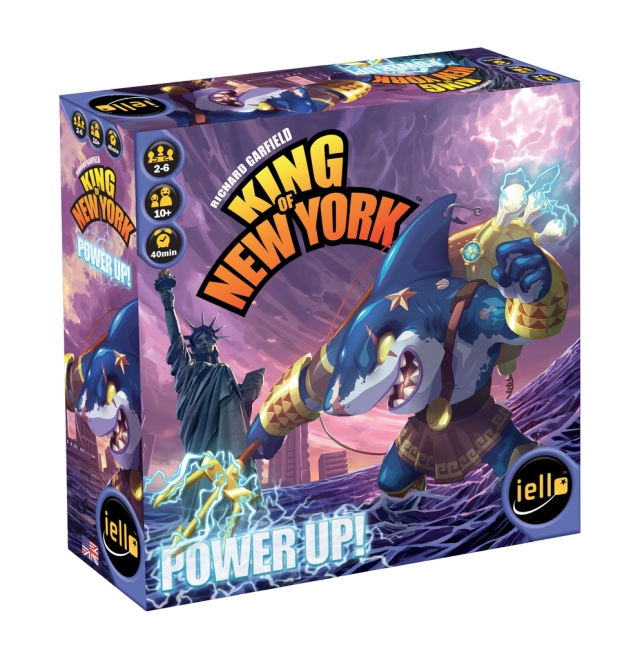 King of New York: Power Up! is an expansion for King of New York by Richard Garfield, published by IELLO. It is for 2-6 players. This expansion adds a new playable character, as well as adding Evolutions for the previous King of New York monsters. It also adds Evolutions for those same monsters to be played in King of Tokyo. For more information on how to play the game, as well as information on the basic setup, you can check out my previous review of King of Tokyo which gives a lot of the same basics of gameplay.

First off as I just mentioned, the expansion adds in both Evolutions for King of New York and King of Tokyo. Before playing with the expansion, you should decide which game you want to play and take the appropriate backed Evolution cards for your chosen monster. The players will then shuffle the cards and draw 2. Players then choose 1 of the cards to keep in their hand. The other card is returned to the deck. The cards are then reshuffled.

If you’re unfamiliar with these games, let me explain what the Evolution card is and how it works. Basically, when rolling your dice if you’re able to roll at least 3 hearts your then able to draw 2 Evolution cards. You pick one to keep in your hand and one to discard. The hearts are still able to be used to heal wounds, as long as your monster is not in New York or Tokyo. The Evolution cards are kept in hand until the player decides to play them. Evolutions can be temporary which means they are discarded after use, or they can be permanent which means they are played face up in front of the player and continue to give benefits as long as they’re in play. 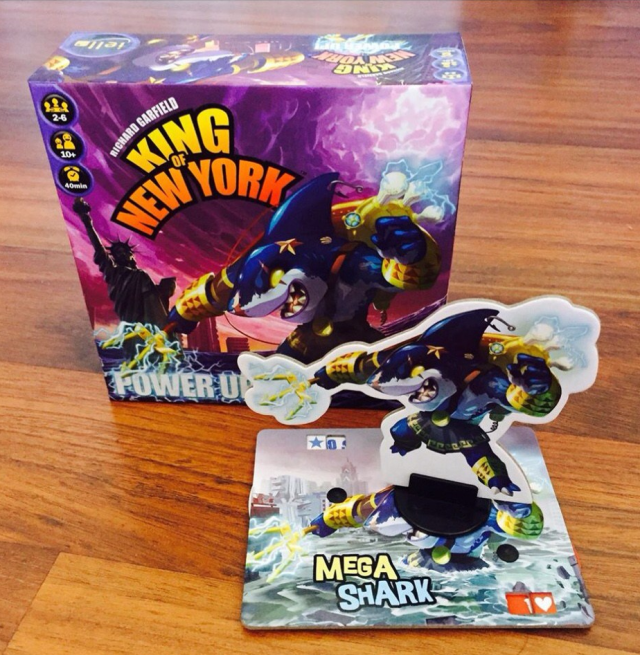 COMPONENTS
As I mentioned earlier, this expansion adds Evolution cards for all of the King of New York monsters. There are cards for these monsters to be played in both King of New York and also in King of Tokyo. King of Tokyo Evolution cards have a white border on the front and the green backs that fit in with the other Evolution cards from that game. The King of New York Evolution cards have a new design on the back and have black borders on the front. That way you don’t get things mixed up. I think that was an excellent idea on the part of the designer. I’m really glad that both sets where included with the expansion. I’m now able to use my monsters together to play in Tokyo. Needless to say, I’m ecstatic about that as I love having more characters to choose from. The expansion also comes with the new Mega Shark character which has a cardboard stand up and plastic stand along with a monster board just like the other monsters in the game do. I have to say, I love the look of the new monster. He’s pretty darn awesome and fits in well with the games previous monsters. Overall, I’m thrilled with the components and love how it looks.
10 out of 10

RULEBOOK
The rulebook for this expansion is rather small. It has a few pictures and a couple of examples inside. There’s a full page that explains the details of the Evolution cards. The back page of the book even includes a variant that allows for a more competitive game using a drafting style mechanic for determining a character’s Evolution cards. I think that was a really nice addition that I’m glad was included. The book is really simple to read through and only takes a couple of minutes. Overall, the design is nice and it fits in well with the game.
9 out of 10

GAMEPLAY
If you’ve already read my review of King of Tokyo, then you know how much my kids and I LOVE it. This just adds even more to an already great game. The thing is that you can add this expansion to either King of New York or King of Tokyo. The best part is that if you have both games, you can now play New York monsters in Tokyo as well as the new Mega Shark. I can’t express my happiness enough about this. I fully expected there to only be Evolutions for King of New York since this was the Power Up expansion for that game. You can imagine my surprise when I found out that it had both. Anyway, enough about my excitement. The new cards add quite a bit to the game without overpowering it. Of course some evolutions are a bit better than others. For instance, Kong has a permanent evolution that allows him to roll 3 dice when he reaches 0 health. If he rolls at least 1 heart, he doesn’t die and he gets 2 hearts back. There are also specially themed evolutions that deal with the boroughs as well as the different facings on the dice that are exclusive to King of New York. Mantis has an evolution that allows him/her to take back Superstar. The King of Tokyo cards are a bit more simple as there’s not as much to deal with in that game. Such as evolutions that deal 1 damage to a monster leaving Tokyo, or adding 2 attacks to a roll if the player rolls four of a kind. Like I’ve already stated, I really love the expansion. Fans of either game will be happy to add this to their collection. I highly recommend it. For me, it’s a must have.
10 out of 10

For more information about this and other great games, please check out IELLO Games at their site.

I'm a happily married man with 2 wonderful kids. I love my family very much. I'm a big fan of board, card and RPG games and have been playing for over 20 years. As a board and card game reviewer, I'm hoping that this blog will inform, educate and entertain you. If you like it, please tell your friends and have them join in on the conversations. Thanks and GAME ON!!
View all posts by Gaming Bits - Jonathan Nelson →
This entry was posted in Reviews and tagged board, board games, card, card games, games, garfield, iello, king, king of new york, king of tokyo, new, new york, power, power up, richard, richard garfield, tokyo, up, york. Bookmark the permalink.