J’Accuse! is a game by Jonathan Lavallee, published by Smirk & Dagger Games. It is for 3-6 players. In this game, players take on the role of suspects in the gruesome murder of a rich millionaire. Each one looks to inherit a large sum of money. However the Chief Inspector suspects that one of the suspects is the guilty party and so he’s determined to crack the case, one way or the other. Players will have to do their best to avoid suspicion and point the finger at their opponents. The player that winds up getting stuck with enough evidence piled against them will be arrested and will lose, while the other players are declared the winners and get away scot-free.

To begin, the 3 evidence decks for motive, opportunity and weapon should be separated by type and then shuffled. The decks are then placed face down in the middle of the play area. Players choose the character sheet of their favorite suspect and place it in front of them on the table. Players are then given a set of 4 suspicion cards; left, right, across and j’accuse! The investigation cards are shuffled and each player is dealt 3 cards face down. These are tucked under the left side of their character sheet. The remaining investigation cards are placed face down to the side of the table. The first player is chosen and is given the Chief Inspector token. Beginning with the first player on their left, a motive card is placed face up in front of the player’s character sheet. An opportunity is placed at the next player’s and the following player receives a weapon card. There should now be 3 different evidence cards face up in front of 3 different players. Play now begins.

The game is played in a series of rounds. Each round consists of 6 steps. In the first step, the player with the Chief Inspector token chooses one of their 3 investigation cards and places it face down beneath the token secretly. In the next step, all the players including the inspector, choose one of their suspicion cards to play from their hand face down. They will be using these cards to vote on whether evidence should be passed to the left, right or across, or to force an accusation using their j’accuse! card. For the next step, all players reveal their suspicion cards at the same time. Players then compare the results. In the next step, evidence moves based on which type of suspicion card gained the most votes. If their is no clear winner because of a tie or if the j’accuse! cards prevail, then the evidence becomes Hard Evidence against the player. I’ll explain this in a minute. For the fifth step, the inspector reveals their investigation card. This will determine which evidence is passed or becomes Hard Evidence. Finally, the round is resolved based on the results.

If evidence is passed, either left, right, or across, the inspector reads aloud each piece of evidence that is being moved. It’s noted that the inspector should be a bit dramatic with the reading while moving the evidence. They should role play it a bit to add a bit of flavor to the game. This should especially be done with the dialogue bubble for the last evidence icon on the card.

If J’accuse! prevailed in the previous step, the evidence becomes Hard Evidence against the player that currently has those particular evidence cards in front of them. Just like with the movement of evidence, the inspector should role play the discovery. Players can reciprocate with a bit of role playing of their own to deny the charges, just for fun. The evidence cards are placed at the bottom edge of the accused player’s character sheet. Replacement cards are drawn from the corresponding decks and are placed in front of players just like during setup. The inspector announces each new piece of evidence as it is placed.

Once the following steps are done, players then flip over their suspicion cards that were just used and place them on their character sheet in the appropriate space. Once a player has used 3 of their suspicion cards, they are then able to pick up all of their used cards to be used again. The inspector token is then moved to the next player in turn order. The steps are then repeated from the beginning.

The game continues until one of two events take place. The game ends once a player has 3 different evidence types as Hard Evidence against them, or if a player has any 5 pieces of evidence as Hard Evidence against them. If either of these happen, that player is the loser and is put away for life. The remaining players win, possibly getting away with murder. 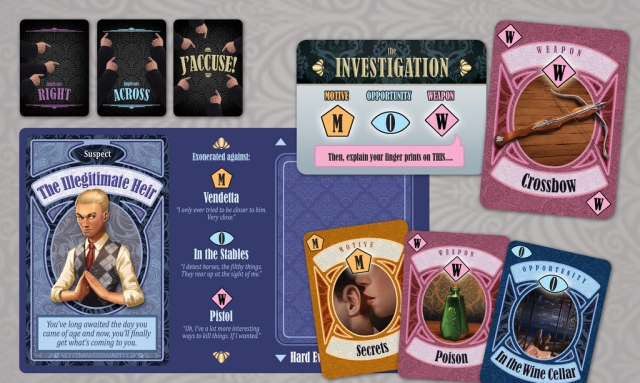 COMPONENTS
The game comes with some really nice looking pieces. The character mats are great. They have some really nice looking artwork. I especially like the different character designs. The mats have a sort of linen style finish on them which gives a bit of texture that I like. The cards are the same way. They have that same sort of textured finish to them as well. It’s this texture on some of the cards that causes a bit of a problem. For instance on some of the cards like the suspicion cards, it dulls down the artwork on the front side. It’s especially bad on the J’Accuse! cards. While I like the textured feel, I can’t say that I’m in love with the way it affects the art. Speaking of the art, I really like the designs and look of the artwork on all the cards. It’s got that Clue like vibe to it that I really enjoy. In the overview, I mention several times the Inspector token. What this is actually is a card with a plastic clip that allows it to sit up in front of a player. It’s a neat concept, however a thicker piece of cardboard or a wooden token would have been a bit nicer. In any event, I’m still happy with the overall design and quality of the components. I can’t complain too much.
8 out of 10

RULEBOOK
The rulebook for this game is really quite nice. It has this really nice linen like finish on it that i simply love. There are tons of great pictures and examples throughout the entire book, including an awesome looking setup picture. The book starts out with a really nice introduction into the world of the game. The rules are well written and the book is well designed. All the different steps of the game are detailed out really well. Everything is easy to read and understand. I didn’t see anything that should be difficult at all. I really feel like the publishers did an excellent job with the rules. I think they look great.
9 out of 10

GAMEPLAY
This is a really great and fun game. The theme of the game makes me think of the game, Clue. Of course this game is nothing like that one. This one leans more towards the take that genre that Smirk & Dagger are well known for. This one does not disappoint either. I really like the voting aspects and how that you really have to out think your opponents before you vote. If you see that another player has evidence in front of them, you can be pretty sure that the player to the left is not going to vote for the evidence to move towards them. Likewise, the player to the right isn’t going to want to move it in their direction either. It’s this kind of thinking that makes this game so interesting. You don’t play the game as much as you play the people that are playing the game with you. Once all the voting is done, the take that aspect kicks into high gear as players start getting evidence piled up on them. Just make sure that it’s not on you. I also really enjoy the role playing aspect of the game. Of course you can play it without getting into character, but why wouldn’t you want to experience the full joy of the game? That would be like going to Baskin Robbins and not ordering any ice cream. In any event, fans of games like Werewolf, Coup or other social deduction games of that nature should really enjoy this one as it takes that mechanic to a different level. This is a game that I would highly recommend especially if you’re keen on role playing. I really enjoy this one and look forward to the next investigation.
9 out of 10

OVERALL
J’Accuse! is a great social deduction game with a take that feel. It’s not very long. Most game sessions last around 30 minutes or so. The artwork and design is really great on all the pieces. The only problem is that the textured finish on the cards tends to detract from the artwork and make it look kind of weird and dull. Also the Inspector token could have been just that, a token of either thick cardboard or wood instead of a card in a plastic stand. However, those are only minor gripes. Overall the game is lots of fun, especially for players that have a flair for the dramatic. Role players will really enjoy this one, as will fans of social deduction and take that style games. I would highly recommend this one. It’s a great game that works really well. No Alibi required.
9 out of 10

For more information about this and other great games, please check out Smirk & Dagger at their site.

I'm a happily married man with 2 wonderful kids. I love my family very much. I'm a big fan of board, card and RPG games and have been playing for over 20 years. As a board and card game reviewer, I'm hoping that this blog will inform, educate and entertain you. If you like it, please tell your friends and have them join in on the conversations. Thanks and GAME ON!!
View all posts by Gaming Bits - Jonathan Nelson →
This entry was posted in Reviews and tagged board, board games, card, card games, dagger, games, j'accuse, jonathan, jonathan lavallee, lavallee, smirk, smirk & dagger, smirk & dagger games, smirk and dagger. Bookmark the permalink.