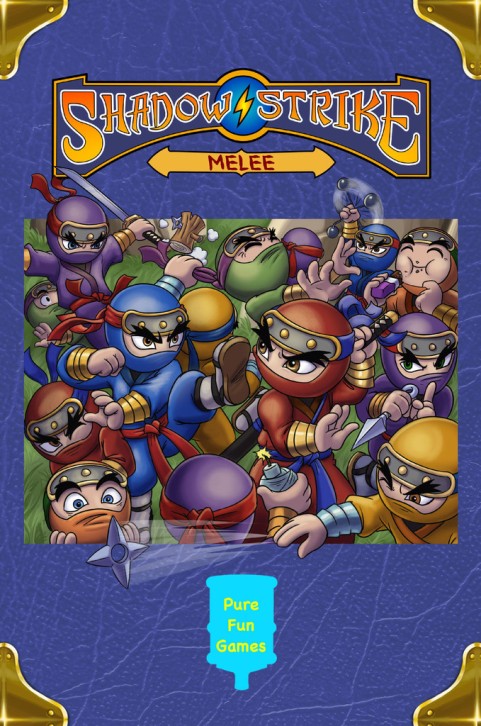 Recently I was given the opportunity to preview an upcoming new game that is currently available to back on Kickstarter. I received a preview copy of the game and rules. These are my thoughts and opinions on the presented materials. Enjoy!

Shadow Strike Melee is a game by Johannes Benjamin III, James Muckell and Josh Buel, published by Pure Fun Games. It is for 3-9 players. In this game, players take on the role of a ninja student trying to complete their final test to become a full fledged ninja warrior. That test comes in the form of an all out brawl with the other students. If they are able to knock out all of the other players and become the last ninja standing, they will be declared the winner.

On a player’s turn, they will choose an opponent to fight. The player will then play one of their fight cards face up to the table. The opponent will then play one of their own fight cards in response. Certain item cards may be played to help out either before or during the fight. The player with the lower fight card loses the fight and must turn one of their fight cards in their hand so that the hit icon faces towards their opponents. Both players will then replace the card they played by drawing a card for each played card from the appropriate draw pile. Face out cards that were played should be replaced face out after drawing, while face in cards should be replaced face in. Item cards are only drawn when the player has no more item cards in their hand. Three new item cards are drawn at that time. Fight cards and item cards that were used are discarded face up next to their appropriate decks. Play then passes to the next player. 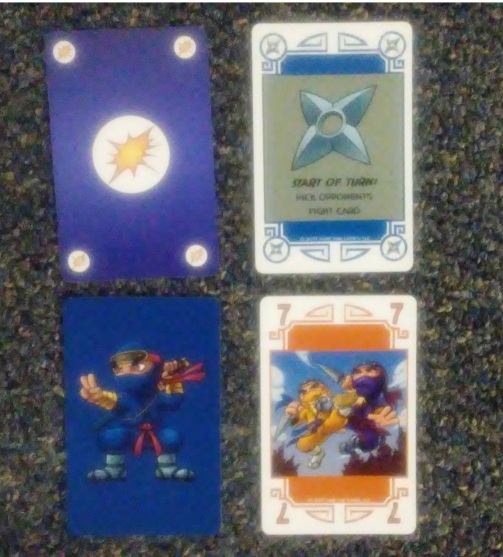 COMPONENTS
Since this is a preview copy, I won’t go into a whole lot of detail here. I will say that the game comes with 2 decks of cards. There is an item deck and a fight deck. The artwork on both decks is very cute and funny. I love the very humorous artwork. The iconography isn’t difficult to understand either. There’s plenty of explanations on the cards so it’s pretty simple. The cards themselves are very good quality, with a good finish and a nice thickness too. There’s plenty of color and humor on each one. There are also several colored team cards for playing team games with. More on that in the gameplay section. All total, everything appears to be really good quality and the artwork is great. I really like everything at this point.
—-

RULEBOOK
Since this is a preview copy, I won’t go into a lot of detail on the rulebook for this one. I will say that the book looks rather nice. There are plenty of great looking pictures throughout. Everything is explained in good detail. There’s a nice section devoted to the different item cards, explaining each one and how they work. There are also some tips on playing the game as well as the rules for playing a team game. The back page has reference for the different icons in the game that’s rather helpful. The book is rather small and doesn’t have a lot of pages to it, so it’s quick and simple to read. Overall I think the book does a good job of conveying the rules in a rather nice looking fashion. I’m pleased with the look so far.
—-

GAMEPLAY
This is a nice fun filler game that is very simple and easy to play. It’s great for playing with a bunch of people. You can play the normal game with 3 or more players or you can play team games with 4 or more. As a matter of fact, team games are recommended for 7 or more players. The only real difference in the team game and the regular game is that players get color coded ninja cards to help players remember which team that each one is on. On top of that, they also don’t take hits when they get into a fight that involves their teammates. In team games, the team wins if they are the last team with at least 1 player standing. As I said, the game is rather quick and it’s full of fast playing fun. I have to say that the backwards cards in your hand made me think of Hanabi, just without the co-op play. There’s actually a fair amount of randomness as you don’t really know what’s gonna happen when you play that fight card. Of course the luck aspect can be mitigated a bit through the use of the item cards. I would say that if you’re looking for a more strategic style game, then this probably isn’t the game for you. However if you like a bit of crazy chaos, in the same vein as say, Munchkin, then you might like this one to. I think that as a filler game it works rather well. It can add a bit of craziness to the mix of more hardcore strategy style games. The kids seem to enjoy the humorous artwork and the silly fun, making it good for families too. Overall, I think the game works pretty well for what it sets out to be.
8 out of 10

OVERALL
Shadow Strike Melee is a light weight card game of ninja fighting fun for the whole family. It’s very quick and simple to play. Most game sessions last around 5 to 10 minutes. The artwork is silly and fun while the quality of the cards is really great. My kids like the cuteness of the ninjas and enjoy the chaotic fun of the game. This is a nice filler game that is good for families and especially for large groups. I like that the game can be played with teams or with everyone for themselves. Fans of games like Munchkin should really enjoy the silly fun of this one as well. I think for those people, this game will work well. More strategy minded players will probably want to give this one a pass. Taking it for what it is, I would recommend giving it a try. It’s simple enough for the kids, yet fun enough for the adults. Overall a nice game.
8 out of 10

For more information about this and other great games, please check out Pure Fun Games at their site.

Keep a look out for the  Kickstarter campaign page, coming very soon.

I'm a happily married man with 2 wonderful kids. I love my family very much. I'm a big fan of board, card and RPG games and have been playing for over 20 years. As a board and card game reviewer, I'm hoping that this blog will inform, educate and entertain you. If you like it, please tell your friends and have them join in on the conversations. Thanks and GAME ON!!
View all posts by Gaming Bits - Jonathan Nelson →
This entry was posted in Preview Reviews and tagged benjamin, board, board games, buel, card, card games, fun, games, james, James Muckell, johannes, Johannes Benjamin III, josh, Josh Buel, melee, muckell, pure, pure fun games, shadow, shadow strike melee, strike. Bookmark the permalink.