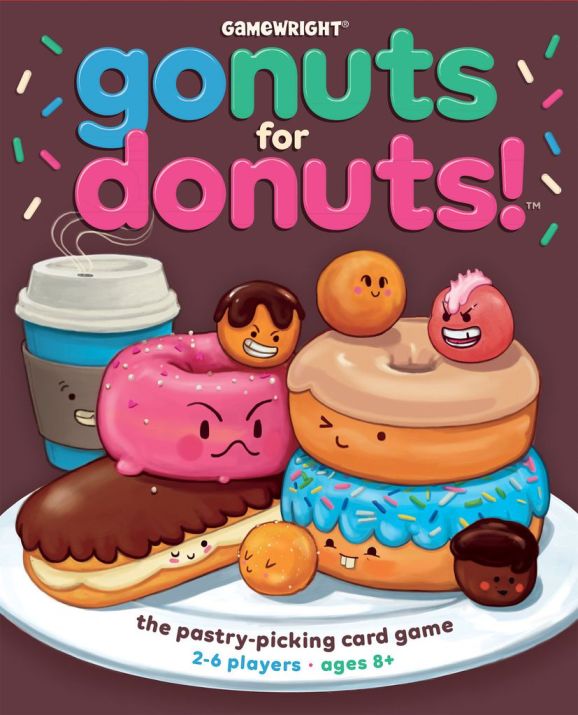 Go Nuts For Donuts! is a game by Zachary Eagle, published by Gamewright Games. It is for 2-6 players. In this game, players will be trying to score the tastiest and best looking donuts from the bakery. However they’ll have to be careful as other players might be after the same donuts as they are, meaning no one gets to eat it. In the end, the player that can choose their donuts the best will be declared the winner.

To begin, each player is given a set of selection cards in numerical order that is equal to the number of players plus 1. For example, in a four player game the player would receive a set of cards with the numbers 1, 2, 3, 4 and 5. Any remaining selection cards are returned to the box. The donut deck is created by adding or removing cards based on the number of players. Each card has a colored background and dot around the outside of the description box to help players determine which cards to use. For a four player game, the teal, pink and purple background cards are used while the blue cards are only used with 5 players or more. The donut deck is shuffled and placed face down near the middle of the play area. A row of cards is then placed to the right of the donut deck equal to the number of players plus one. This area is known as the donut row. A donut row number indicator is then placed above each card in numerical order, starting with the number 1 nearest to the deck and moving to the right. Once this has been taken care of, play now begins.

The game is played over several rounds. At the beginning of each round, players will secretly choose which of the available cards they want by taking the selection card that matches the card’s number from their hand and placing it face down in front of them. Once all players have chosen a card, everyone reveals their face down card. Starting with the lowest number and going up, players will look to see if they are able to take their chosen card. If only one player chose the card number, then they are able to take it from the donut row and place it face up in front of them. If two or more players chose the same card, then no one gets it. The card is then immediately discarded to the discard pile. If a player was able to take a card and it has a star in the corner of it’s description border, then that player is then able to activate it’s special power when they take it from the donut row. It should be noted that this power is only able to be activated if the card was taken from the donut row. No powers are activated if the card was taken from another player, drawn from the deck or taken from the discard pile.

Once all of the cards that were selected by players has been taken and any special powers resolved, the donut row is refilled. That means that any empty spaces in the donut row are filled by drawing a new card from the deck and placing it into the vacated spot, starting with the lowest number and moving upward. Players place the selection card that they used during the round back into their hand. A new round will then begin in exactly the same way as above.

The game continues until there aren’t enough cards in the donut deck to completely refill the donut row. When this happens, each player will then look at each of the cards in front of themself and count up the points received for each one, being sure to include any points earned from any special powers noted in the text of each one. The player with the most points is the winner. 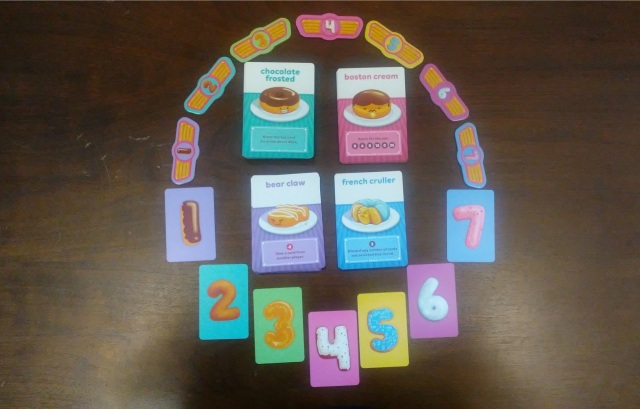 COMPONENTS
These have got to be some of the cutest looking cards and pieces that I’ve seen since Sushi Go Party. The game consists of mainly two decks of cards. There are the small euro sized cards that are the selection cards. These have a number shaped donut on them. The other card deck is the actual donut cards. These are normal sized cards that have the different donuts on them that players will be trying to acquire through the game. The artwork on each of these cards is really cute and fun. The donut designs all have a silly and cute little face, much like the different types of sushi in Sushi Go. The back side of the cards make me think of the old Dunkin Donuts shops from the 80’s. Each card has a really nice textured satin finish on them that makes them very easy to shuffle. The special abilities on the cards are easy to figure out and the text is large enough to read without any trouble. The other pieces that come with the game are the donut row indicators. These are made of thick cardboard and also have the same numbered donut designs as those on the donut selection cards, except with wints or vents. I’m not sure what the design is actually supposed to be. I’m saying wings. Each of these is double sided and have a shiny finish to them. I have to say that I’m pretty pleased with the overall designs of everything inside the box, including the insert, which fits everything in a nicely designed slot specific to each piece. Overall I think that the game is simply too cute for words and that it looks great. Kids will definitely love the designs and will be quite happy to see each new card type come out onto the table. I’m very happy with how this game looks.
9 out of 10

RULEBOOK
The rulebook for this game is actually quite good. There are plenty of pictures and examples of gameplay in the pages of this book. Everything is explained really well and is quick and easy to read. The rules of the game are very straight forward and simple. The book also includes a donut guide that includes detailed explanations of each card along with a picture of each donut type. The guide even separates the donuts by the background colors of the cards so that you can easily find what you’re looking for. I’m really thankful for this, even though most of the cards are pretty much self explanatory. I didn’t see anything in this rulebook that was difficult to understand at all. This is a very well thought out and well designed rulebook. I’m very pleased with the overall look and design.
9 out of 10

GAMEPLAY
This game is so cute and so fun. When I first saw it, I immediately thought of Sushi Go. Each of the cute little faces on each one reminded me a lot of the different sushi images. In some ways these games are similar but also very different. In Sushi Go, you’re drafting cards from different hands of cards that rotate till they’re all gone. In this game, you’re selecting cards as well, except that you’re not always guaranteed a card each round. Sometimes you’ll pick the same card that another player chose which means that neither one of you get a card that time. You really have to think about what the other player already has and what they might be going for. Are they wanting that donut with the high point value or do they want to be able to draw another card from the deck giving them 2 cards this round. Do they want to add to their set of donut holes or do they want to give you a negative card. These are the kinds of things you have to think about. While this is a fast paced game, it does have a little bit of strategy to it, not that you’re going to be spending 10-15 minutes trying to decide what move you’re going to make, like in some of those strategy and war games. Still with more players, you do have to make some tough decisions. With fewer players, the negative cards and those that interact more with the other players, don’t really enter into the game. It’s in those higher player counts that things can get a bit crazy and chaotic. I like that I can play a simple game with just my daughter or I can get the whole family together and really go at it with everyone. This is a great family card game that the kids will especially love. It’s also a great filler game as well. The short play time makes it easy to bring to the table during a night of longer games quite easily. Fans of games like Sushi Go should love it for sure. Even though there are some similarities, this one is different enough that you can own both without any real overlap in gameplay. Needless to say, my daughter absolutely adores this game and so do I. This is one that I would highly recommend. What more is there to say? I love this game.
9 out of 10

OVERALL
Go Nuts For Donuts! is a fast paced card game full of donut goodness. It’s quick and easy to play. Most game sessions last around 20 minutes or so. The cards are great quality and have some of the most adorable looking artwork that I’ve seen. Many players will find the look very similar to that of Sushi Go. The rulebook is excellent and has a very helpful donut guide inside with pictures and explanations of each of the different cards. The game itself is a lot of fun. It reminds me of Sushi Go, but is different enough that players can own both without there being any overlap in gameplay. The game is family friendly and is fun for everyone from the kids to the adults. It also works as a great filler for a longer night of gaming. This is one that my daughter and I love. The more players that play, the more interaction there is between players and the more chaos there is. With fewer players, the game focuses more on gaining points and collecting sets of donuts. This is one that I can easily play with my daughter just to have fun, or I can play it with the whole family and we can get crazy. The varied styles of gameplay are an amazing part of this game. Fans of games like Sushi Go should love this one. I highly recommend this game. It’s great for families, even those with younger kids. It’s definitely got mine and my daughter’s seal of approval. We love it a lot. One thing though, don’t be surprised if you’re craving donuts after playing it. I am.
9 out of 10

For more information about this and other great games, please check out Gamewright at their site.

I'm a happily married man with 2 wonderful kids. I love my family very much. I'm a big fan of board, card and RPG games and have been playing for over 20 years. As a board and card game reviewer, I'm hoping that this blog will inform, educate and entertain you. If you like it, please tell your friends and have them join in on the conversations. Thanks and GAME ON!!
View all posts by Gaming Bits - Jonathan Nelson →
This entry was posted in Reviews and tagged board, board games, card, card games, donuts, doughnuts, eagle, games, gamewright, gamewright games, go, go nuts for donuts, nuts, zachary, zachary eagle. Bookmark the permalink.