Starlight Stage: Shining Star is an expansion for Starlight Stage by Hironatsu Yamada, published by Japanime Games. This expansion makes it possible to play with 5th player. It also adds lots of new cards to be added with the base game.

For more information on Starlight Stage and how to play the game, please check out the link below.

So what exactly does this expansion add to the base game of Starlight Stage. Well, as was mentioned earlier, this expansion now makes it possible for a 5th player to join in playing the game. It also adds in 13 new Idol cards, 27 new Event cards and 14 new Fame cards for your talent agency to work with. That’s pretty much it. 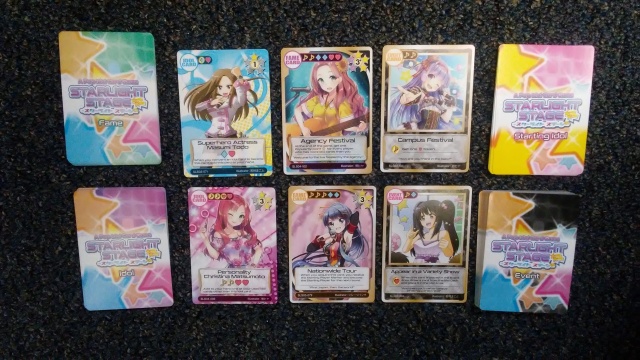 COMPONENTS
This expansion comes with a stack of 60 cards. Just like the cards from the core game, these are also quite nice. Each one has artwork that looks like something from an anime movie or a manga comic. These fit in well with the style and look of those from the original game. The glossy like finish and thickness of the cards are all great quality. If you like the artwork and designs from the first game, then you’ll most definitely like these as well. The game simply adds more cards to choose from and work with while playing the game. There’s really not much more to say apart from that. I like the look and feel of these cards and think that they just add more goodness to an already good looking game.
8 out of 10

RULEBOOK
The rulebook for this game is a double sided sheet of black and white glossy paper. The front side contains the rules for adding the cards from this expansion to the base game, along with which cards to remove. It also has some clarifications on three of the special cards, along with black and white pictures of each. The back side of the sheet is most filled with some frequently asked questions which can be of assistance while playing the expansion. It also contains how to set up the game and expansion for playing with just 3 players, explaining which cards to reduce the numbers of. There’s not really a whole lot here, but then again it’s not like you actually need to know much. The game is still played exactly the same, just with more cards now. While I wouldn’t have minded the rules sheet to be in color, it’s not like it’s a big necessity either. Pretty much the rules sheet does exactly what it needs to in terms of getting you ready to play with both the expansion and core game. Not much needed other than that.
7 out of 10

GAMEPLAY
The cards from this expansion don’t really add a whole lot, as far as new mechanics or extended play time. Pretty much they simply add enough cards for a fifth player and they add more of the Idol, Events and Fame cards. It just gives you more selection and options to choose from. In my opinion, the introduction of new cards gives a bit more replayability to the game, as the same cards aren’t always showing up. I guess that would be my main reasoning for getting this, the replayability. Yes, it’s nice to be able to have another player added to the game, but if the game is getting played a whole bunch, you don’t want it to get stale or old. I would also like to mention that while the base game has a few eye raising cards, this one was a little more conservative and less out there. I think that fans of the core game, will no doubt want to add this to their game. Overall, it’s a no brainer and is worth picking up a copy. I would definitely recommend it.
8 out of 10

OVERALL
Starlight Stage: Shining Star is an expansion for the Starlight Stage game that adds a lot of new cards and replayability to the game. It adds 60 cards to the main game including 13 new Idol cards, 27 new Event cards and 14 new Fame cards. The expansion doesn’t really add any more time to the actual game play. Most game sessions are still around 30-45 minutes. Just like the main game, the cards are very cute and fun with the look and feel of an anime movie or manga comic. The rulebook is a simple sheet of black and white paper but covers what you need to know in order to add the new cards to the base game. The expansion doesn’t really add anything as far as new mechanics. Mainly it just adds more cards to choose from and the ability to play with 5 players. I think that fans of the base game will be happy to add this to their collection. Overall this is one that I would recommend adding to the base game. It’s well worth it.
8 out of 10

For more information about this and other great games, please check out Japanime Games at their site.

I'm a happily married man with 2 wonderful kids. I love my family very much. I'm a big fan of board, card and RPG games and have been playing for over 20 years. As a board and card game reviewer, I'm hoping that this blog will inform, educate and entertain you. If you like it, please tell your friends and have them join in on the conversations. Thanks and GAME ON!!
View all posts by Gaming Bits - Jonathan Nelson →
This entry was posted in Reviews and tagged board, board games, card, card games, games, hironatsu, hironatsu yamada, japanime, japanime games, shining, shining star, stage, star, starlight, starlight stage, yamada. Bookmark the permalink.