Rolling America is a game by Hisashi Hayashi, published by Gamewright. It is for 1 or more players. In this game, based on Rolling Japan, players will be rolling dice in order to fill up their map of the United States. They’ll have to be careful though as where they place their number matters. The player that is able to fill the most states with numbers will be declared the winner.

To begin, each player is given one of the tear off map sheets from the pad. All of the dice are placed inside the bag. The first player is chosen and play now begins.

On a player’s turn, they will draw 2 dice from the bag and roll them. The colors and numbers are then announced. The dice are then resolved in any order. There are six colored non-wild dice and one white wild die. The non-wild dice are resolved by choosing one of the empty states that match the color of the die and writing the number on the die in the state’s box. The wild die is resolved by choosing one of the empty states of any color and writing down the number in the state’s box. It should be noted that when you are writing in a die number the neighboring state rule must be followed. This rule is that all the states that border the state that you are currently filling must either be blank, have an X, be guarded or have a number difference of no greater than 1 from the die result. A player must write a number in an available blank state if it doesn’t break this rule. If a player is unable to write a number without breaking the rule, then they must mark an X in one of the blank states that match that die’s color. If there are no available blank spaces in the colored region, the die result is ignored. Once both dice have been resolved, players count the number of dice that are out of the bag. If there are fewer than 6 dice, the bag is passed to the next player. If there are 6 dice out, then all the dice are returned to the bag. Players will then cross out the next empty round box on their player map. A new round then starts.

The game continues until 8 rounds have been played. After 8 rounds, players must then mark an X in any of their remaining blank states on their maps. Players then pass their maps to the player on their left, who makes sure that all the rules have been followed. An X is marked for each mistake. Player then count up the Xs and write the total number in the “number of Xs” box. Players compare the results and the player with the fewest number of Xs is the winner. 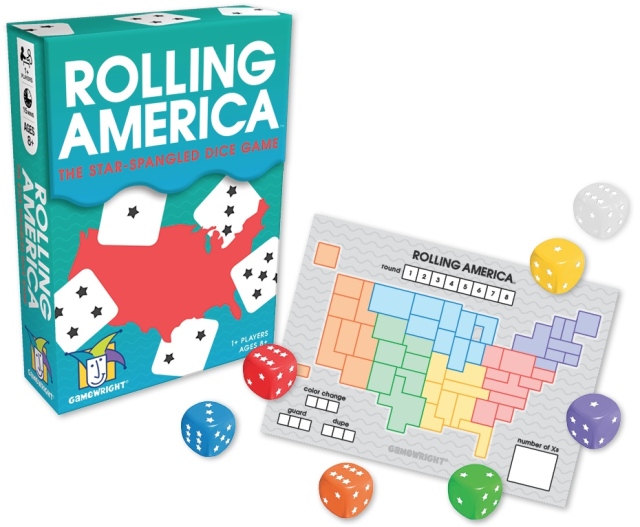 COMPONENTS
This game comes in a small pocket sized box that has a magnetic close on it. Included inside are 7 dice, a dice bag and a pad of player maps. The dice are really good quality and are brightly colored. Instead of pips on the dice there are stars. I have to say that I kinda like the look. The dice bag is nice and has the name of the game screen printed on it. The pad of maps has plenty of pages that are double sided, so you shouldn’t be needing any replacements any time soon. Of course you can always make a copy or print some off from the company’s website. The only thing missing is a pen or pencil to write on the map with, which I’m sure everyone would have available. Overall, I like the components. I think that everything looks nice and that it fits nicely inside the box.
8 out of 10

RULEBOOK
The rulebook for this game is a glossy double sided paper that folds up to fit just inside the box. One side has the English rules and the other has Spanish. There are lots of nice pictures and examples included in the rules. Everything is laid our really well to make it simple to understand. It doesn’t take long to read through either. Each of the abilities is explained in detail so there should be not problems at all. Also included in the rules is a section on playing the game solo. Overall, I feel that the rules are well done.
8 out of 10

GAMEPLAY
This is a great little filler style game. It’s not a difficult game to learn but there’s quite a good bit of strategy involved in it. The main idea of the game is just to roll a couple of dice and place the numbers on your sheet. Simple, right? This would make you think of games like Yahtzee, and you wouldn’t be wrong to think that. After all, Yahtzee has dice and a game pad. The thing is that there’s actually a lot more to the thought process when it comes down to making decisions in this one. Yes, like Yahtzee the game is pretty much a solitaire style game. The decisions you make are not gonna affect anyone else’s map. The thing is that unlike Yahtzee, you’ve got to decide when to use those special abilities. Also, Yahtzee has that press your luck mechanic going for it. This one is simple roll 2 dice and place the numbers some where on your map. You will find yourself agonizing over when to use your abilities and where to place numbers. Yes, you still have a good bit of luck involved through the dice rolls. However it’s what you do with those rolls that makes the difference. What really makes this game interesting for me is that even though everyone uses the same dice rolls, there are never 2 maps filled out exactly alike. In any event, this game has quite a bit of strategy to be a simple dice game. Fans of Yahtzee will definitely enjoy this one. It really packs a punch for such a small box.
8 out of 10

OVERALL
Rolling America is a dice rolling strategy game. It doesn’t take long to play. Most game sessions last no more that about 15 minutes. That makes this a really great filler style game. It’s really small and portable so that it can be played anywhere. The dice are really nice. I especially like the stars instead of pips on the dice. The game can be categorized as multi-player solitaire with a Yahtzee feel. That makes it great for any number of players from 1 to 100. Of course, I’ve never played it with a 100 players so I might be exaggerating just a bit. There’s actually quite a bit of strategy for being just a simple dice game. You will agonize over every decision you make. Fans of Yahtzee will definitely enjoy this one. I would recommend this game. It’s really great and it has a ton of replayability. With a small price point and big fun, you can’t go wrong with this one. What’s next? Rolling Europe?
8 out of 10

For more information about this and other great games, please check out Gamewright at their site.

I'm a happily married man with 2 wonderful kids. I love my family very much. I'm a big fan of board, card and RPG games and have been playing for over 20 years. As a board and card game reviewer, I'm hoping that this blog will inform, educate and entertain you. If you like it, please tell your friends and have them join in on the conversations. Thanks and GAME ON!!
View all posts by Gaming Bits - Jonathan Nelson →
This entry was posted in Reviews and tagged america, board, board games, card, card games, dice, dice games, games, gamewright, gamewright games, hayashi, hisashi, Hisashi Hayashi, rolling, rolling america. Bookmark the permalink.